The Düsseldorf, Germany-based company said the test was conducted at Rheinmetall’s Ochsenboden Proving Ground (EZO) in Switzerland, in snowy conditions and blinding sunlight. It was initially supposed to demonstrate the increase in efficiency of the company’s 50kW HEL weapon compared with the previous 10kW version, which was demonstrated in 2011.

Furthermore, the tests were intended to show that separately located HEL weapon stations based on Rheinmetall’s existing Beam Superimposing Technology can irradiate a single target in a superimposed, cumulative manner.

Rheinmetall commented, “This modular technology approach makes it possible to maintain the very good beam quality of the individual laser modules, increasing overall performance several times over. Thus, from the technical standpoint, nothing stands in the way of a future HEL weapon system with a 100kW output.”

The 50kW HEL weapon technology demonstrator comprised two functional models: a 30kW weapon station integrated into an Oerlikon Revolver Gun air defence turret for static and dynamic tests, coupled with an Oerlikon Skyguard fire control unit; and a 20kW weapon station integrated into a Revolver Gun turret of the first-generation, patched in for static tests. There were also additional modules for supplying power.

The demonstration delivered compelling evidence for the 50kW HEL weapon technology demonstrator’s high stability: a massive, 15mm-thick steel girder was cut through at a distance of 1,000m. The successful shooting down of several nose-diving target drones at a range of 2km formed the second major highlight. 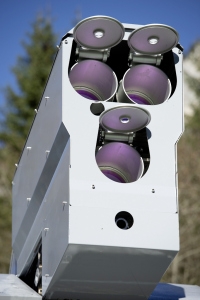 Although they were flying at over 50m per second, the Skyguard radar had no trouble detecting the incoming unmanned aerial vehicles at a distance of 3km. Then the 30kW weapon station used the Skyguard data to carry out rough tracking mechanically. The optical tracking system in the Beam Forming Units (BFU’s) in the individual leaser weapon modules performed fine tracking of the UAVs. The laser weapon modules engaged the UAV’s immediately and destroyed them in a few seconds.

The third demo highlight was the detection, pursuit and successful engagement of an extremely small ballistic target. The target was a steel ball measuring 82mm in diameter and travelling at approximately 50 m/sec, which replicated a mortar round.

The Skyguard fire control unit immediately detected the target, followed by mechanical tracking with the 30kW laser weapon station. At this point, the BFU of the laser weapon module took over, optically tracking the target, which was then engaged and destroyed in flight. Rheinmetall said that the demonstrations “left no doubt as to the tactical viability of using laser weapons in future C-RAM scenarios.

”These tests have silenced the sceptics, proving that Rheinmetall’s HEL weapon technology demonstrators can neutralize targets even under the most difficult weather conditions, including snow, dazzling sunlight, ice and rain. Furthermore, the tests provide compelling proof that Rheinmetall leads the way in matching the energy and cooling requirements of a future HEL weapon system to the operational scenario requirements.”

Compared to last year, Rheinmetall has significantly increased the power density (kW/m3) of the technology demonstrator, enabling it produce twice the laser output within the same volume.

Rheinmetall says it is now planning to set up a company-financed 60kW technology demonstrator in 2013 with greater laser output. Besides laser weapon stations, the plan calls for integrating 35mm Ahead Revolver Guns into the system. This will enable Rheinmetall engineers to identify and study possible synergies between laser weapons and automatic cannon.

The concept for a mobile HEL weapon, which was successfully implemented with a 1kW functional model mounted on a special TM170 vehicle, will also be pursued, this time with different mobile platforms in order to explore the parameters for integrating an HEL weapon on vehicles operating in the open.