A new software system and a deal with Daimler promote incorporation of the technology into manufacturing cycles. 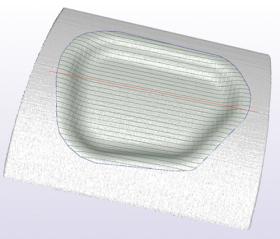 On the right path: LaCam3D software

The Fraunhofer Institute for Laser Technology has demonstrated a new offline programming system for use with laser material deposition (LMD) operations.

The LMD process is one of a group of manufacturing techniques in which a laser melts a powdered or unfused feedstock material to fabricate near-net-shape parts and prototypes. These methods are part of the wide family of technologies known as additive manufacturing (AM).

The new LaCam3D program is intended to speed up the critical generation of a CAD model of the desired part, built up from cross-sectional layers and used to determine the laser parameters and tool paths required.

A prototype of LaCam3D has been in use at Fraunhofer ILT in Aachen for the last two years, and the software is being presented to the public for the first time during November's EuroMold show, held in Frankfurt.

The LaserCUSING process, another member of the additive manufacturing family, forms small-batch parts by a direct metal sintering process, in which a laser fuses metal powder to form a component through the build-up of sintered layers.

Developed as a means to avoid the pores that can be left in a component by a straightforward laser sintering operation, LaserCUSING "puts many times the energy used in laser sintering into the powder bed," according to Concept Laser. This completely melts the powder so that fully-dense parts and components are directly formed. 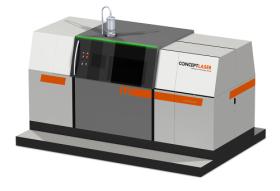 The new LaserCUSING platform, the X line 1000R, has been designed to allow the operation to take place on a substantially larger scale than previously possible, using a bigger reaction chamber and a laser described as a kilowatt-range source.

A key partner in the development has been Daimler, which intends to use LaserCUSING to replace costly sand-casting and die-casting operations in the early stages of product development.

The X line 1000R has been configured specifically to match Daimler's requirements, and its wish to improve the build rates and surface finish of the short-run components produced during its development cycles. Achieving this involved closer control of parameters including temperature control inside the reaction chamber and the powder application system.

"This really was uncharted territory for us," said Frank Herzog of Concept Laser. "The development of a machine concept of these dimensions in close collaboration with Daimler AG and the Fraunhofer ILT clearly illustrates our claim to be the technology leader in the field of laser melting."

The first version of the new machine is already said to be in commercial operation at Daimler.

AM in the UK
Additive manufacturing is also the focus of recent announcements in the UK, where the government's Technology Strategy Board (TSB) recently announced a planned investment of £7 million in the further development of AM technology.

The initiative takes the form of a competition named Inspiring New Design Freedoms in Additive Manufacturing, which opens on December 3rd 2012. The TSB stated that it will be focused mainly on innovations to help businesses bring components and consumer items made using AM to market more quickly, and to accelerate the adoption of AM technologies in the UK.

This comes on the back of a TSB report in September 2012 that identified difficulties in effective commercialization and a lack of strategic vision for AM in the country.