The National Ignition Facility’s Mike Dunne expects to see fusion with gain in around nine months. 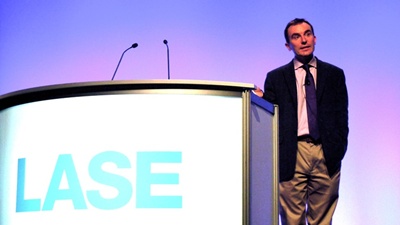 by Mike Hatcher in San Francisco
Mike Dunne, the National Ignition Facility’s director for laser fusion energy, is expecting the giant laser system to generate fusion with energy gain, or "burn", by the end of 2012.

Deputizing for NIF director Ed Moses in a Photonics West 2012 plenary talk, Dunne said that the ignition campaign was now in its latter stages. “We are now in a position to say with some confidence that ignition will happen in the next 6-18 months,” stated the former head of the HiPER European laser fusion project, adding that he felt personally that the breakthrough was likely to happen in around nine months.

One key areas of progress in the ignition project has been better-than-expected results in damage limitation to optical components, which Dunne said should now “go well beyond the initial specifications of NIF.”

But one of the toughest parts of the project has been perfecting the design of the deuterium-tritium target – not surprising, given that under the colossal pressures generated by the 192 NIF laser beams it implodes at an astonishing one million miles per hour.

Although the current design is not felt to be totally optimized, Dunne remarked that the NIF team now has a genuinely engineered solution in place, having started the project with a blank piece of paper.

With the end of the ignition campaign now in sight and the system yielding excellent uptime and what Dunne described as “exquisite” reproducibility, the NIF beams are starting to become used as a general scientific tool more regularly. Recent work has included recreating conditions at the centers of gas giant planets, and aiding the study of supernovae.

Last month NIF announced that in the first university-based planetary science experiment at the facility, researchers had been able to gradually compress a diamond sample to a record pressure of 50 megabars, or 50 million times Earth's atmospheric pressure. 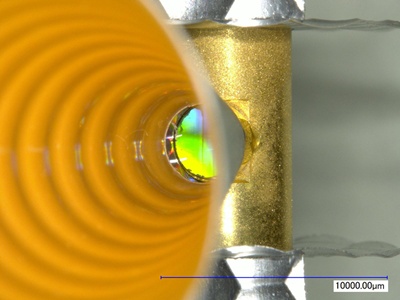 Commercial angle
The NIF team is also starting seriously to look beyond ignition and towards the implementation of fusion-based power stations. That is still a long way off, although Dunne showed what is known as the “LIFE box” – a compact, modular version of the NIF laser system that fits in a 10 meter-long unit rather than requiring a ten-storey building the size of a football field.

The main difference between NIF and the LIFE designs for energy production will be the adoption of laser diodes to pump the Nd:glass amplifier crystals, meaning that the entire system will become a lot more energy-efficient and – it is hoped – suitable for commercial deployment.

Dunne said that NIF has so far engaged with around 40 industrial partners in the early stages of the LIFE project, and that the next 6-12 months will see the more formal organization of “delivery partnerships” for the project.

One of the key requirements for commercial energy production will be to deliver much more energy out of the system than is put in, because a small amount of fusion-driven energy gain would soon be wiped out by system inefficiencies. But Dunne believes that once gain can be achieved, this should be readily possible as the pathway to higher gain is more linear. This should mean that a factor of 50 gain ought to be possible with a relatively marginal increase in laser power, he said.

“The next year will tell us what the exact point of optimized energy input really is,” he concluded.