Billion-pixel sensor to map universe in 3D is built

As uncertainty surrounds the future of NASA’s James Webb Space Telescope, a 106-CCD, meter-long space camera is assembled in France. 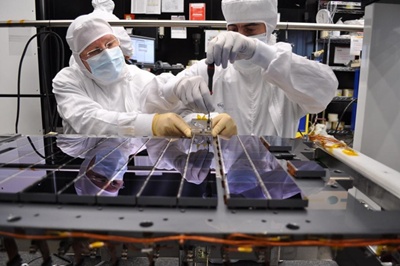 Technicians at Astrium France in Toulouse have finished assembling and aligning more than 100 CCDs that will form the eyes of “Gaia” - the largest digital space camera ever built, and due to start producing a 3D map of the universe after its launch in 2013.

The mosaic of detectors, arranged in seven rows of 16 CCDs in the main array, plus four more that will provide image quality control, were produced by the UK firm e2v Technologies. Each of the detectors measures 4.7 x 6 cm, and the total size of the array is a remarkable one meter long by 50 cm wide. Each of e2v’s back-illuminated CCDs provides a 4500 by 1966 array of pixels, meaning that the entire assembly represents a 937 megapixel camera.

Philippe Garé, Gaia payload manager at the European Space Agency (ESA), says that the assembly step just completed is one of the most important in the development of the camera: “The mounting and precise alignment of the 106 CCDs is a key step in the assembly of the flight model focal plane assembly,” he said.

Astrium’s technical staff took one month to fit the detector mosaic together, reportedly completing the task on June 1 after working double shifts throughout May to add four CCDs per day on average.

But in a week when their confidence may have been dented by news that the James Webb Space Telescope (JWST) is facing an uphill battle to be completed after running over both time and budget, the result of all the painstaking work on Gaia should be a spectacular one for astronomers.

Delayed launch
Gaia had originally been scheduled for launch this year, and once it is in space it is expected to map an unprecedented amount of the night sky. Over the course of a five-year mission, ESA is hoping to map one billion stars across both the Milky Way galaxy and our more distant cosmic neighbors.

To obtain stereo views of those stars and generate a three-dimensional stellar map, the optical payload comprises two telescopes. After launch, it will be deployed permanently in the shadow of the Earth, in the so-called “second Lagrangian point” where the forces of orbital motion and gravitational effects are exactly in balance – providing a stable point in space 1.5 million km from the surface of the Earth.

As well as providing a new map of the heavens, Gaia will be able to measure the color and intensity of each star, thanks to the six different optical instruments that will use the giant camera.

More than half of the CCD array - nine columns of seven detectors – will be used to measure star positions, but also on board are a blue and red photometer. Some of the CCDs have been optimized for enhanced sensitivity at either the blue or red end of the visible spectrum to provide more detailed spectral information.

In addition, Gaia’s high-resolution radial velocity spectrometer will measure the velocity of objects in space, while wavefront sensors and basic angle monitoring instruments are also incorporated in the array.

Over the course of the five-year mission, each of the billion target stars will be monitored approximately 70 times, with Gaia’s detectors looking for any slight changes in the position, brightness, and color of each star. ESA is also expecting the telescope to discover hundreds of thousands of as-yet-undiscovered stellar objects, including an anticipated 15,000 extra-solar planets and brown-dwarf stars.

Relativity test
Gaia will also be used to test Einstein’s General Theory of Relativity to its limits, by measuring the impact of the sun’s gravity on starlight to a precision of two parts per million.

Like Gaia, NASA’s JWST – the successor to the wildly successful Hubble mission – is behind schedule. But JWST has also run over its initial budget to such an extent that the project is now threatened with cancellation. Although such a drastic outcome is not yet certain, legislation passed by the Republican-controlled House of Representatives in Washington, DC, last week contained several cuts to government spending and specified JWST as a major target.

In the Appropriations Committee’s fiscal 2012 budget for the Commerce, Justice and Science departmental spending, $16.8 billion was earmarked for NASA - $1.6 billion less than FY 2011 and $1.9 billion below President Obama’s request.

Aside from continuing the close-out of the Space Shuttle program, the committee agreed only $4.5 billion for NASA’s science programs, while its bill singles out JWST for “termination”, adding that the project is “billions of dollars over budget and plagued by poor management”.