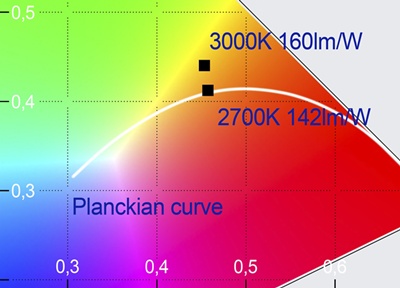 Researchers at Osram Opto Semiconductors in Germany have set a new record efficacy for a warm-white LED.

The device showed an efficacy of 142 lm/W at a correlated color temperature (CCT) of 2755 K, and a color rendering index of 81.

Although the technology will likely take a couple of years to be replicated in a volume production process, Osram OS says that its result demonstrates that white LEDs could be used to produce light that is similar to the classic "warm" emission of an incandescent bulb, but with a far higher energy efficiency.

The new record was measured under standard test conditions [room temperature operation; pulsed mode; 350 mA/mm2 operating current density] after the Osram OS team tweaked characteristics including epitaxial growth, thin-film architectures and packaging. But according to the company, further improvements can be expected.

One straightforward way to do that would be to increase the CCT to 3000 K, for a slightly “cooler” white light. “If we apply this approach further and allow deviations from the Planckian curve, we should be able to achieve values of up to 160 lm/W,” said Norwin von Malm, pre-development manager at Osram OS.

And the figure can be further improved by developing a 2 mm2 chip, he added. “We can improve efficiency by a further 10 to 15 percent for the same operating current. We would then expect 180 lm/W for a pure warm-white LED and good color rendering,” he said. Using a small chip size makes it easier to produce high efficacies, because smaller chips are easier to cool, and the junction temperature of any LED affects luminous efficacy, color and reliability.

Track record
Since Osram OS does not quote any peer-reviewed publication to back up its latest work, the announcement should be treated with some caution. However, the company does have a good track record of turning laboratory breakthroughs into true commercial processes. If an efficacy of 180 lm/W can be achieved within a couple of years in a volume process, it would represent a significant breakthrough.

That’s because even though an LED-based luminaire would inevitably be of a lower overall efficacy than a packaged chip, it should also be much more efficient than a comparable fluorescent or high-intensity discharge (HID) lamp.

For comparison, the Solid-State Lighting Science (SSLS) Energy Frontier Research Center (EFRC) at Sandia National Laboratories in the US estimates that standard warm-white incandescent bulbs operate at just 16 lm/W, fluorescents at an average of 71 lm/W and HIDs at 96 lm/W.

The company said on March 8 that it had demonstrated a luminous efficacy of 135 lm/W using the novel process, which could in theory help to make high-brightness white LEDs far cheaper by doing away with the need for expensive sapphire wafers on which to grow the light-emitting semiconductor layers.

Bridgelux recorded the efficacy figure at a CCT of 4730 K – a “harsher” white light than produced by typical residential lamps – from a single 1.5 mm LED chip operating at 350 mA.

If the process can be replicated on a volume scale, again something that would likely require a couple of years further development, and therefore make use of 8-inch silicon semiconductor fabs that have largely depreciated in value, the cost of solid-state lighting could be cut dramatically. Osram OS is also known to be working on GaN-on-silicon LEDs, and many of the world’s leading manufacturers are thought to be at least investigating the approach.