Leading industrial laser vendor Rofin-Sinar sees a softening of the semiconductor market from its 2010 high, but solid demand overall. 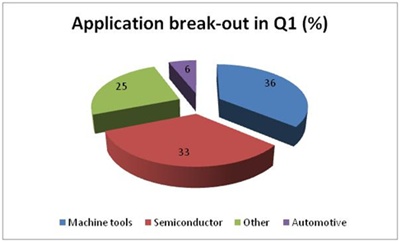 Rofin-Sinar, one of the world’s leading suppliers of industrial lasers, posted another strong set of financial results in its opening fiscal quarter of 2011, with sales up 10% sequentially at $137.1 million.

The company, German in origin and now headquartered in Plymouth, Michigan, as well as Hamburg, says that overall orders have continued to strengthen in recent months, despite softening demand for semiconductor applications such as laser marking of silicon chips.

CEO Günther Braun said: “We experienced higher demand in most of the industries that we serve, particularly in the consumer electronics industry. We believe that the recovering global macroeconomic climate and our backlog, which is one of the highest in our history, provide us with a solid basis for the upcoming quarter.”

Braun added that Rofin shipped 1091 lasers during the latest quarter, of which 455 were high-power products destined for macro applications like cutting and welding, with the remaining 636 set to be used in micro-processing and marking applications.

Splitting out the quarterly sales by market, the leading sector for Rofin was machine tools, typically comprising CO2 lasers and largely a result of demand from China’s fast-growing manufacturing base.

The semiconductor market, including applications in solar cell and LED production, was the next-biggest sector, accounting for 33% of sales. And although Braun indicated that sales to semiconductor applications in fiscal year 2011 would likely drop by 25% compared with 2010 levels, he pointed out that the second half of last year represented a historic high in terms of demand. 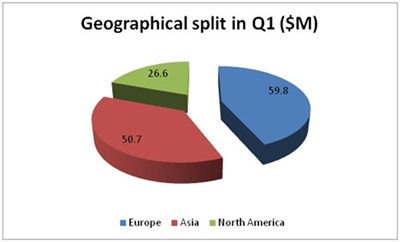 2011 confidence
Even taking that softening into account, with a backlog of $146.4 million – the third highest in the company’s history – Braun and his colleagues are confident of a strong financial performance in 2011 overall.

So although sales in the current quarter will be flat or slightly down sequentially, partly due to the Chinese New Year holidays this month, Rofin’s forecast is for revenues to reach somewhere between $540 million and $560 million for the full year – compared with $423.6 million in fiscal 2010.

“We are running on 2008 levels,” Braun said, admitting that demand had recovered faster than the company had expected over the past few months.

As a result of that, Rofin is working to expand its manufacturing capacity to meet the additional demand, at a cost of around $15 million. The company is also spending on a significant research effort towards the development of higher-power fiber lasers, which only represent a small proportion (about 8%) of sales currently.

Rofin already sells fiber lasers, but its highest-power offering currently is only a 2 kW system. The company did show a 4 kW system at last year’s EuroBLECH event, however Braun admitted that to make a real impact in the key automotive welding and cutting sector, a 6 kW laser is required.

With its new LASAG subsidiary already performing slightly ahead of revenue expectations, Rofin reported a net profit of $14.9 million for its opening fiscal quarter of 2011. That figure was up sequentially and, at 11% of total revenues, also indicated improving margins.

• Shares in Rofin softened slightly in response to the company’s latest financial report, but at close to $40 the stock price remains at a level that has not been exceeded since mid-2008.