Company's laser division saw a strong jump in demand in the latest quarter, but will be subject to supply chain disruptions. 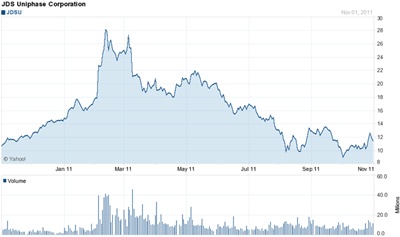 Diversified optics and photonics company JDSU says that its commercial lasers operation will be disrupted by the major floods that have hit Thailand over the past two weeks.

As well as a number of key optical communications products, including tunable XFP and reconfigurable optical add/drop multiplexers (ROADMs), the majority of JDSU’s commercial lasers are assembled at Fabrinet’s Pinehurst facility.

Although floods at that site are not as bad as those to have hit Fabrinet’s nearby Chokchai campus (used by other optics firms including Opnext and Emcore), and power has now been restored at Pinehurst, the widespread disruption is impacting a number of photonics companies that use Fabrinet for contract manufacturing.

JDSU’s CEO Thomas Waechter now estimates that the disruption will hit sales by between $35 million and $45 million in the current quarter, with the final impact depending on the rate at which production can be resumed at the Pinehurst site.

Prior to the flooding, JDSU’s commercial lasers division (which includes its photovoltaic cell operations) had produced its strongest quarter in more than two years, as revenues grew more than 20% year-on-year to $30.2 million. Waechter attributed that in part to strong demand for JDSU’s range of diode-pumped, Q-switched Nd:YAG lasers, which are used in solar cell and semiconductor manufacturing.

JDSU also posted $2 million in revenues for its kW-scale fiber laser, which it says has been well received in the market – albeit with what the company described as a “modest” customer base. JDSU has just released a second (4 kW) generation of this high-power fiber laser following collaboration with its Japanese partner Amada, while it also expects to begin shipping some new pulsed fiber lasers in the second half of 2012.

Inventory shake-out
Despite the strength in commercial lasers, JDSU’s overall revenues remain dominated by the optical communications sector, where it sells test and measurement equipment as well as many of the key components and modules that feature in optical networks.

With this sector having undergone a period of inventory correction, sales of products like ROADMs and tunable XFPs were generally down in the company’s opening quarter of fiscal 2012. However, bookings increased strongly, particularly for tunable XFPs, indicating that the period of correction could finally have shaken out.

“We believe most of the inventory build-up has been worked through, evidenced by a 20% [sequential] increase in total optical bookings,” the company said in its investor presentation. “Tunable XFP bookings grew 70% quarter-over-quarter, ROADM bookings grew nearly 25% [and] Super Transport Blade bookings increased by 28%.”

Overall, California-headquartered JDSU reported sales of $421.1 million sales for the quarter, of which 44% ($185.2 million) related to test and measurement equipment. The remaining 56% was divided between $180.3 million from its communications and commercial optical products (CCOP) division, which includes the commercial lasers operation, and $55.6 million from the advanced optical technologies (AOT) division.

The AOT division includes a wide range of optical applications, including holograms for bank cards, as well as anti-counterfeiting banknote technologies, and 3D cinema projection. Although AOT revenues were down 5% sequentially on general economic weakness, JDSU said it was now making capital investments in support of growth forecasts from banknote manufacturers and customers in the security sector.

In its financial guidance, JDSU said it expected to post total revenues of between $375 million and $405 million in the current quarter – dependent to a significant degree on the rate at which production in Thailand can be resumed.

“While we are implementing our contingency plans, and are encouraged by the events over the past week in Thailand, we cannot be assured that our plans will be successful, or the rate at which production will ramp - leading us to this wide range,” JDSU stated. “This guidance estimates a $35-45 million revenue impact due to the flood.”