IMS Research analysts say that the global average retail price of a 60W incandescent replacement is now $36 - but twice that in Germany. 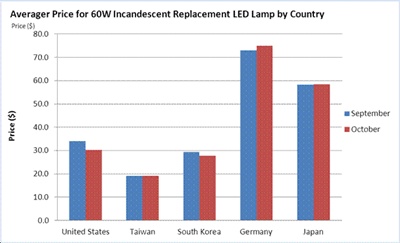 Despite recent fluctuations in currency valuations pushing up the average price of LED replacements for 60 W incandescent lamps slightly, analysts at IMS Research say that demand for the new technology is growing fast.

The market research and consultancy firm has just launched a monthly tracker for LED lamps, finding that the average price for a 60 W replacement now stands at $36. But that headline figure masks a wide variation in prices between regions.

For example in Taiwan the average price is just $19, while Germany has the most expensive lamps, costing an average $70. In North America, where it is estimated that there are more than two billion 60 W incandescent lamps installed in residential applications alone, the average price is towards the lower end of the spectrum, having fallen to $30 in the US.

IMS says that a recent fall in the US average is largely due to a decision by Philips to cut the price of its “Ambient” LED lamps from $40 to $25. “This change is extremely important as 60 W bulbs are the most widely installed lamp in the world today,” said the firm.

And although the global average price of a 60 W replacement has increased from $34 last month, IMS said that this could be explained by sharp recent currency fluctuations, with the long-term price trend remaining very much a downward one.

With LED chip prices having fallen very rapidly this year, and energy costs increasing around the world, the case for replacing conventional lighting with solid-state technology is getting ever stronger. Analyst Philip Smallwood from IMS says: “The LED lamp market is going to evolve at breakneck pace in the coming years. New brands, improvements in the technology, consumer awareness and government regulations are all driving demand for these lamps.”

Opportunity
With 60 W incandescents already being phased out, and compact fluorescents suffering from something of an image problem, IMS says that LED replacements now have an enormous market opportunity, and there are clear signs of progress being made:

For example in its latest financial update, Philips reported a sharp rise in sales of solid-state lamps (LED-based product sales were up 32% year-on-year), indicating the growing level of demand. “We are preparing our lighting business for the transformation to LED,” noted Philips CEO Frans van Houten.

Van Houten also noted strong sales of LED lighting in China, where recent reports suggest that wholesale prices of some 60 W LED replacements may be as low as $10. However, IMS also warns that a lack of standards has led to a large number of LED products being mislabelled or misrepresented. It found that more than one-fifth of all LED lamps did not meet the minimum lumen output requirements to be considered genuine replacements for incandescent bulbs.

Meanwhile Optogan, a relative newcomer to the LED lighting world, will be aiming to penetrate the European market with a lower-cost option in early 2012. The Russia-headquartered company has just officially opened its new LED chip production site in Landshut, near Munich in Germany. 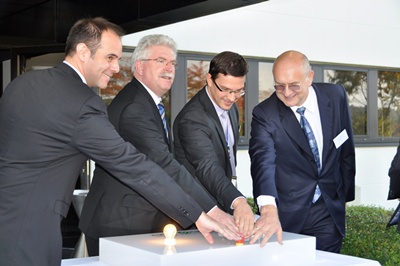 The site, formerly a semiconductor fab owned by Hitachi, has a potential clean room area of 4000 m2, says Optogan, and supports an initial production capacity of more than one billion LED chips per year.

Optogan told optics.org last month that it believed the ‘tipping point’ for popular demand of 60 W LED replacement lamps was around $20. It is set to launch its 60 W product globally in early 2012 at a price of around €30 (currently $41), but the company’s international sales director Ove Sörensen said that the price of those LED lamps should fall below $20 by the end of next year.

IMS’ Smallwood added: “With price being one of the most important purchasing decision factors for consumers, and a healthy oversupply in the LED space, it will be exciting to see how quickly prices drop around the world.”