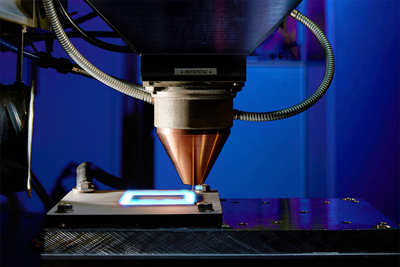 Collar Hybrid AM process relies on a combination of arc and laser deposition.

An example of hybrid technology in its purest form has been developed and built by the Fraunhofer Institute for Laser Technology (ILT) for the DVS research project “KoaxHybrid”.

In Aachen, Germany, the institute’s engineers have developed a new optical system with glass substrates and an arc torch which unites metal shielding gas (MSG) welding and laser material deposition with an annular beam, thus creating a completely new process.

Interested parties can find out how the so-called Collar Hybrid process can be used to increase the welding speed and the deposition rate in metallic 3D printing at a specialist congress organized by DVS – the German Welding Society – between September 19 and 21 in Koblenz, Germany.

The new process combines the best of both worlds: two different additive processes with wire-shaped filler material. The team explains thus: “We are talking about wire arc additive manufacturing and wire laser material deposition. Both processes have system-related advantages and disadvantages; compared to WAAM, WLMD is costly, has low deposition rates, but is characterized by low heat input and precise layer build up exactly at the desired location.

“For this reason, it is particularly in demand in the aerospace industry. If a higher application rate is required, WAAM is the better choice, whereby the achievable surfaces are wavier and the layer build up is significantly coarser.”

In joining, the combination of laser beam welding and gas metal arc welding is established under the name LB-GMA hybrid welding. However, this lateral process is direction dependent and only suitable to a limited extent for joining three-dimensional seams.

When these processes are combined coaxially, the deposition rate can be increased by up to 150 percent, so that the new direction-independent 3D printing process can also be used for large components.

“Because the surface waviness decreases, the amount of post-processing required is significantly reduced compared to the WAAM process,” said Max Fabian Steiner, a research associate at Fraunhofer ILT. 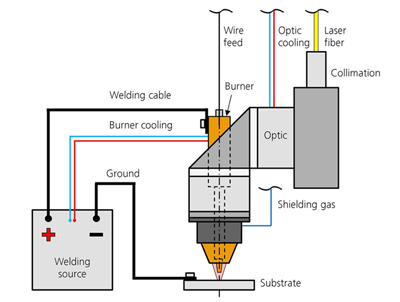 Wire arc additive manufacturing is an established and robust process, for not only can the necessary system technology be acquired inexpensively, but most metallic materials can be processed with it. Steiner explained its drawbacks: “However, the arc cannot be focused as precisely as a laser beam. It cannot be used to produce as fine and precise tracks as with a laser.”

With his institute colleague Jana Kelbassa, Steiner has developed and built – as a countermeasure – a special water-cooled optical system with glass substrates and a water-cooled arc torch for welding and additive manufacturing at high powers. In the new optical system, both energy sources are superimposed and the strengths of the two individual processes are profitably combined.

In the hybrid process, the arc between the end of the wire and the substrate is enclosed by the annular laser radiation, as if by a collar. The idea behind this combination is that the arc cannot break out of this collar and is forcibly guided.

The new process owes its name, Collar Hybrid, to this “forced guidance,” whereby the acronym Collar refers to the common coaxial laser arc of the two processes.

While Fraunhofer ILT is using the new system technology to further develop metallic 3D printing with annular-shaped laser beam and arc technology, the RWTH Aachen University Institute for Welding and Joining (ISF) is using it to develop direction-independent hybrid welding with ring focus and coaxial wire feeding. Both use cases are part of the DVS research project KoaxHybrid.

Steiner added, “When it comes to welding seams that are not just linear, such processing gets difficult. At every corner or curve, the conventional setup would have to be rotated, which leads to a great deal of effort in programming the paths.”

An alternative is the Collar process, whose optics enable welding in any direction at all. In addition, it promises another positive effect: “We expect that new, less complex weld preparations at the joining partners will be sufficient for thick sheets due to the guided arc,” he said.

If very fine and coarse structures are required, the proportions of the processes can be varied. With a pure or majority laser process (the arc switched off completely or at low power), the challenging areas and fine structures can be deposited; with a majority arc process, the coarser structures, such as wide ribs or areas with large deposition rates, can be deposited significantly faster, more cost-effectively and with lower energy input.

Similar build strategies also lend themselves to materials such as aluminum or copper, which otherwise usually require much more expensive beam sources with blue or green laser light.