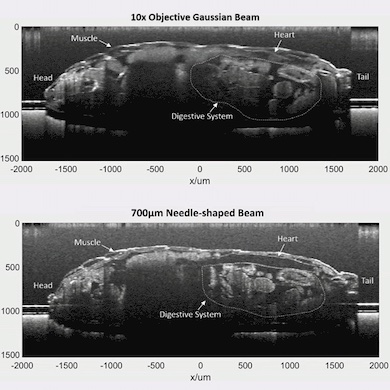 Using this kind of pulse in microscopy has been recognized as a route to enhancing the depth of focus, but to date there as been no convenient technique to generate a range of such pulses, limiting their applicability in real-world microscopy applications.

A project at Stanford University has now developed a new method for creating a variety of needle-shaped laser beams of different lengths and diameters. The work, published in Optica, investigated the particular advantages for OCT imaging that the shaped pulses could bring.

Although the axial resolution of OCT is constant along the imaging depth, it usually features a small depth of focus. OCT instruments are often made so that the focus can be moved along the depth to capture clear images of an entire region of interest, commented the Stanford team, but this dynamic focusing can make imaging slower and difficult when the sample is not static.

"Needle-shaped laser beams can effectively extend the depth of focus of an OCT system, improving the lateral resolution, signal-to-noise ratio, contrast and image quality over a long depth range," said Adam de la Zerda from Stanford University School of Medicine. "However, before now, implementing a specific needle-shaped beam has been difficult due to the lack of a common, flexible generation method."

The Stanford approach employed a micro-structured phase mask fabricated on a fused silica wafer to create various light patterns and numerous focal points. Groups of pixels in the phase mask were patterned so as to create many distinct densely spaced foci in the axial direction, effectively forming a needle-shaped beam with a long depth of focus.

Improved resolution for all microscopy systems

In trials, the needle-shaped beams were used first to image 0.8-micron polystyrene beads, and then for imaging of human skin epidermis. Both resolution and contrast were found to be better, and "NB allows for cellular-level resolution through a deep DOF," according to the team's paper.

The technique was also used to image the heartbeat, digestive system and muscle motion in Drosophila larva using a beam that was 700 microns long and 8 microns in diameter. This captured movement of the heart valve within the heart tube that was invisible with a conventional Gaussian beam.

A future improvement to the platform could see the diffractive optical element replaced with a single flat metalens, exploiting the ability of such metastructures to influence beam profiles in ways that conventional optics cannot. Such a metalens could be placed on the skull of a mouse to observe the neuron dynamics inside the mouse brain in real time, noted the project. Other microscopy modalities could also benefit.

"Needle-shaped beams can be used to improve the resolution of all microscopy systems, including particle manipulation with optical tweezers, materials processing, confocal microscopy, multiphoton microscopy, photolithography and photoacoustic tomography,” said Stanford's Jingjing Zhao. "Our model can also be applied to electromagnetic waves for terahertz imaging and even the mechanical waves used in ultrasound imaging."