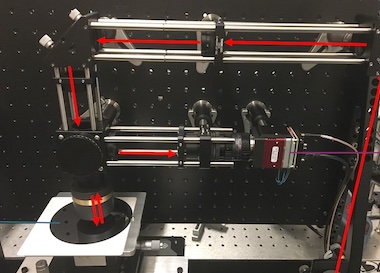 Advanced space telescopes like the ones currently envisaged by NASA and collaborators require advanced mirrors for their operation. Making those high-resolution thin-shell coated mirrors remains challenging, however.

Thin mirrors are harder to fabricate to an exact shape than thicker ones, and the film coatings applied to the mirror surface in order to achieve desired reflectivity often have an intrinsic stress associated with them that adds to the deformation.

A project at MIT's Kavli Institute for Astrophysics and Space Research has now developed a laser micromachining technique that could help solve this problem, by selectively removing regions of stressed film and modifying the stress of the overall mirror.

As published in Optica, the technique should allow the high-throughput correction of thin shell mirrors for space-based telescopes, in particular x-ray missions such as NASA's Lynx X-ray Surveyor currently scheduled for launch in 2036.

"It is difficult to make ultra-thin mirrors with an exact shape because the fabrication process tends to severely bend the thin material," said MIT's Heng Zuo. "Also, telescope mirrors are usually coated to increase reflectivity, and these coatings typically deform the mirrors further. Our techniques can address both challenges."

The project builds on previous research at MIT into space-based mirror fabrication and the selective adjustment of the coatings applied to them, including precise mathematical modelling of the effects of these adjustments. In April 2022 MIT described a mathematical approach whereby stress tensor mesostructures could be created on coated structures using standard semiconductor fabrication methods, influencing the stresses experienced on those surfaces after the coatings had been applied.

The new project uses femtosecond laser micromachining to selectively remove regions of coating from the back surface of a mirror, after a map of the necessary stress correction has been calculated using MIT's models. A multi-pass correction scheme uses a feedback loop to repeatedly reduce errors until an acceptable mirror profile is achieved.

"Femtosecond lasers can create extremely precise holes, channels and marks with little collateral damage," noted the project. "The high repetition rates of these lasers allow faster machining speeds and throughput compared to traditional methods. This could help speed up fabrication for the large numbers of ultra-thin mirrors required for next-generation x-ray telescopes."

"Our results showed that patterned removal of periodic holes leads to equibiaxial bowl-shaped stress states, while fine-pitched oriented removal of periodic troughs generates non-equibiaxial potato-chip-shaped stress components," said Zuo. "Combining these two features with proper rotation of the trough orientation we can create a variety of stress states that can, in principle, be used to correct for any type of error in the mirrors."

The next steps will involve moving beyond creation of regular patterns on flat silicon wafers. X-ray astronomy telescope mirrors are curved in two directions, so the researchers are developing a more complex optical setup for 3D movement of the substrates.

"The technologies our group developed will help telescopes obtain sharp images of astronomical x-rays that can answer many intriguing science questions," Zuo commented.