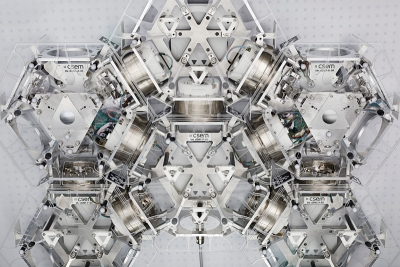 With the James Webb Space Telescope (JWST) only just unfurled, and yet to begin its scientific mission, scientists in Switzerland are already working on ways to deploy even more powerful and complex optical hardware in space.

At the Centre Suisse d’Electronique et de Microtechnique (CSEM) in Neuchâtel, a team is looking to robot assembly as a way to overcome the physical limitation imposed by traditional rocket launches on the size of the telescope that can be deployed.

Under the €4 million EU-funded Horizon 2020 “PULSAR” project, due to conclude at the end of March, the goal is to build a prototype version of an ultra-large structure assembly robot.

“To explore deeper and further into space, telescopes must grow to epic sizes,” points out the team at CSEM. “Given the limited payload capacity of spacecraft, sending such behemoths into space presents a real challenge.

“A solution to this problem currently undergoing research involves sending telescopes into space in separate components. These components could then be assembled by autonomous robots once the instrument is in orbit.”

35-meter mirror possible
With collaborators including French firms Magellium and Thales Alenia Space, plus the German Aerospace Center, the aim is to develop the technological building blocks needed for autonomous assembly in space, with potential applications including not just telescopes, but perhaps also giant solar power arrays.

The project consortium recently unveiled three demonstrators, including one robotic system that could be used to construct a telescope’s primary mirror.

“This demonstrator can build a 1:3 scale mirror (300 mm x 180 mm) consisting of six tiles weighing 11 kg each,” stated CSEM. In the demonstrator version, each tile was covered with a transparent plate, but under real-world conditions they would be equipped with a mirror.

While the initial demonstration shows what is possible with relatively small components, the size could increase dramatically. Julien Rouvinet, a senior engineer at CSEM who is working on PULSAR, predicted:

That kind of mirror size would be many times larger than the JWST’s 6.5 meter-diameter-equivalent primary reflector - and closer to the size of the very largest terrestrial telescopes now under construction, such as the Extremely Large Telescope and the Giant Magellan Telescope.

Robot arms
A robotic arm on the demonstrator platform connects and operates each of the six optical components. CSEM custom-designed the six tiles, including two with tripods - enabling them to adjust their positions with a precision of just one micron, and with a repeatability better than five microns.

Those tripods are able to achieve such precise positioning thanks to the use of 3D-printed flexible joints, said to be a first in this kind of space application, while the software used to control and calibrate the system was also developed by CSEM’s engineers.

Rouvinet explained: “The 3D-printed joints prevent the system’s components from rubbing against each other and wearing out, eliminating the need for lubricant. That means the system can operate for longer and deliver enhanced precision.”

Although the demonstrators are now completed and PULSAR will shortly come to a conclusion, the CSEM team believes that research in this area is only just getting started.

“Telescopes are not the only large structures that will one day need to be assembled in space,” says Rouvinet. “And this robotic system could be used for other purposes as well, such as to repair satellites, refuel space stations, assemble solar panels or even build huge heat shields for missions to land on Mars.”