Covid-19 impacts meeting – but World of Photonics Congress will switch to digital format between June 20th-24th, 2021. 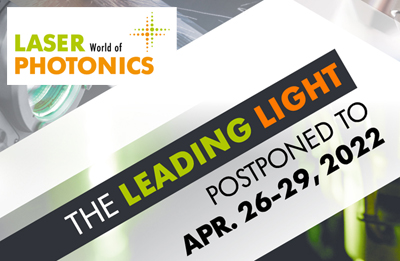 Messe München, the organizer of LASER World of Photonics, the trade fair for photonics components, systems and applications, has announced the postponement of this year’s gathering in Munich, Germany, until spring 2022.

However, this year’s World of Photonics Congress is still set to take place in a digital format on the original planned dates of June 20th-24th, 2021.

Messe München’s statement says, “Due to the existing travel restrictions and the currently unclear Covid-19 situation, we have decided to postpone LASER by ten months.

“One of the main grounds for this decision is the large share of international exhibitors and visitors, accounting for more than half of the total number current conditions. Holding LASER in June 2021 would make it impossible for the trade fair to live up to its standard of being the world's leading trade fair and to provide the on-site platform for innovations and products with in-depth technical discussions.”

Dr. Reinhard Pfeiffer, Deputy Chairman of the Board, Messe München, said, “With the new date, we can offer our customers planning certainty in a timely manner. With this postponement of the trade fair event, we are creating the basis for a successful in-person international trade fair and following the wishes of our exhibitors and visitors.”

The organizer said it has worked out the details of postponing the planned trade fair in close consultation with the Exhibitors' Advisory Board. A clear majority of the exhibitors surveyed support the date change.

“We support the postponement to April 2022 and are already now looking forward to the time the photonics industry will definitely be able to meet again in person,” said Dr. Wilhelm Kaenders, Chairman of the Exhibitor Advisory Board of LASER and board member of Toptica Photonics.

At this year's virtual World of Photonic Congress there will be five conferences with more than 40 sub-topics. The range of topics will extend from basic research to applied science, from laser science, photonics and quantum optics, optical metrology, digital optical technologies and biomedical optics to the use of lasers in production engineering.

Messe München added that until the next in-person meeting in Munich, “a new webinar series will facilitate knowledge exchange and communication in the industry”. The first two editions of “LASER World of PHOTONICS Talk” will focus on the trend topic of quantum technology. The series will start on March 3 at 11:00 CET and will be streamed live. Participation via the LASER World of PHOTONICS website is free of charge.