CPI and Kelvin Nanotech in £5.4M project for quantum sensors to detect magnetic field given off by healthy lithium cells. 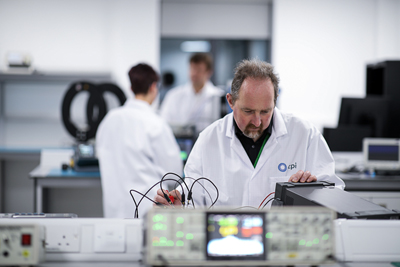 CPI, an independent technology innovation center located at several sites across the North East of England, has announced its participation in a collaborative project – termed the Quantum Sensors project – to develop sensors “for revolutionizing quality assessment and battery grading in the manufacturing line”.

The project is intended to advance electric vehicle battery manufacturing in the UK and overcome cost barriers to enable the widespread adoption of electric vehicles. CPI is a founding member of the UK Government’s High Value Manufacturing Catapult.

CPI comments that by 2030 it is anticipated that 50% of vehicles produced will be partially or wholly electric, but there are still challenges in battery and lithium cell technology that need to be addressed in order to achieve this. Cell age testing is used to determine if a cell meets quality standards and can provide an indication of its state-of-health.

This process traditionally involves storage for two weeks at elevated temperatures, creating energy inefficiency and elevated costs. There is an urgent need for rapid, continuous and non-invasive monitoring of the cell on the production line.

The Quantum Sensors project is a collaboration between 11 partners in the supply chain to develop a pilot scale system capable of continuous end-of-line testing of battery cells using optically pumped magnetometers (OPMs). The system will feature an array of OPMs, which act as quantum sensors to detect the small magnetic field given off by healthy lithium cells. This technique can be used to monitor the quality of battery cells on the production line in order to quickly reject faulty cells and provide detailed quality assurance.

CPI comments that improving quality assurance in this way “has the potential to save millions of pounds per site annually in end-of-line testing at Gigafactory scale and knock 30% off the cost of production.” This project will involve the development of a UK supply chain for the manufacturing of OPMs, including vapor cell production, laser manufacture, optical packaging, magnetic shielding, electronic control and data processing systems. The end goal of the project is the creation of a pilot scale battery testing system that can be implemented within a trial production line.

Academic partners will provide and further develop sensor know-how and conduct validated measurements on battery-cell stacks. A set of industrial partners will establish the value chain, from component production and assembly to prototype packaging and market application. CPI is to provide electronics integration and process testing for packaged optoelectronics at its Photonics Centre in County Durham. Additionally, CPI will be involved in upgrading the specifications for upscaling production of the sensors and assembly aspect of the project, which will run until August 2023, with £5.4 million of funding provided by Innovate UK.

Tom Harvey, Photonics Lead at CPI, said, “Improving battery quality testing will not only help to reduce inefficiencies within battery manufacturing but will really put the UK on the global map in terms of electric vehicle battery innovation.”

Kevin Brundish, CEO of AMTE Power, said, “This is an exciting project to lead given the potential of reducing battery cell production costs by 30%. The current solution for end-of-line battery testing is too time consuming and is a hindrance for companies, such as AMTE, who are seeking to develop large scale battery cell manufacturing in the UK.“