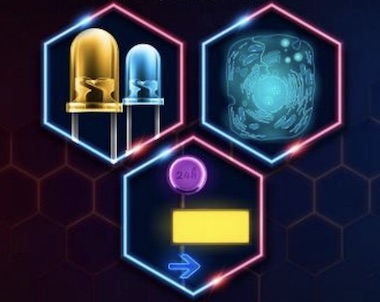 Luminescent transparent films that emit intensely when irradiated at specific wavelengths have several attractive applications in novel displays, LEDs, and other sectors, but the key requirement remains control of the color being emitted.

The challenge can be particularly significant for films designed to emit more than one color, and finding efficient ways to influence the color and intensity of multicolor light emissions has proven difficult.

A team at Tokyo University of Science has now developed a method of controlling the chemistry in a particular form of polymer film, in a manner which allows the emission to be tuned. The findings were published in Materials Advances.

The raw material used was Nafion, a family of polymeric films known to be both proton conductors - in which electricity is conducted with protons as the primary charge carriers rather than electrons - and cation exchangers, readily attracting positively charged particles. A variety of functional films have been developed based on Nafion to take advantage of these properties, according to the Tokyo team.

The new breakthrough exploited the way that a molecule of Nafion polymer behaves in a polar solvent, with cavities around 4 nanometers in size opening up in the structure, within which large molecules or complexes can then be immobilized.

This behavior was used by the project to incorporate complexes of N-(2-pyridinyl)benzoylacetamide (HPBA) into the Nafion film. HPBA responds to pH adjustment in a manner which controls its inherent emission properties, through changes in its electronic structure.

The project synthesized two particular diketonate complexes: one containing terbium and known to be a green light emitter, and the other based around europium, which emits red light. Complexes of HPBA with both of these compounds were then synthesized and crystallized, and these complexes were in turn incorporated into transparent Nafion films. The effects on emissions of changing the pH with buffer solutions and of manipulating an electric field environment were then investigated.

When the final Nafion product was immersed in an acidic solution of pH 2 to 5, ie. a proton donor, it turned green. Soaked in an alkaline solution of pH 9 to 12, a proton acceptor, it turned red. And in a neutral solution, pH 6 to 8, it turned yellow, through a combination of red and green. In addition, when an in-plane external voltage was applied to the film, red wavelength emission appeared to migrate toward the negative electrode.

"We think that this was the most challenging part of our study, and incidentally also our biggest success," commented Makoto Tadokoro of Tokyo University of Science.

"The finding that the flow of protons in a solid medium under an electric field can be controlled, which in turn allows us to control the color of emitted light, is unprecedented. In biological systems, ion flows are responsible for many essential biochemical activities. The 'solid-state ionics' demonstrated by us can find applications in a lot of different fields."

Since Nafion film is transparent, incorporating luminescent complexes into the films enables fabrication of transparent luminescent materials in which light scattering and self-absorption are minimal, according to the Tokyo team. This could make them useful as energy-saving materials, detectors for pH gradients in biological cells, or for constructing novel displays

The next steps for the project include adding a blue-light emitting complex to the system, potentially fabricating a transparent material that emits light over the entire visible spectrum.

"Our findings show that it is possible to fabricate inexpensive multicolor emitting glass or film materials whose emissions can be tuned by simply applying a voltage to control the proton flow, and therefore proton gradient, within the material," concluded Makoto Tadokoro. "Not only electron conduction, but proton conduction can be a way in which the luminescence of materials is controlled."