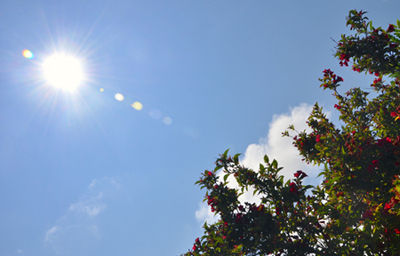 Conversion efficiency is boosted by the absorption of more visible wavelengths.

Theoretically, around 30% energy-conversion efficiency is regarded as the upper limit for traditional single-junction solar cells, as most of the solar energy that strikes such a cell passes through without being absorbed, or becomes heat energy instead.

Now, a new solar cell design at Japan’s Kobe University could raise the energy conversion efficiency to over 50% by absorbing the spectral components of longer wavelengths that are usually lost during transmission through a cell.

This research has been carried out by a team led by Professor Kita Takashi and project assistant Professor Asahi Shigeo at university's Graduate School of Engineering and the group’s findings were published in Nature Communications. 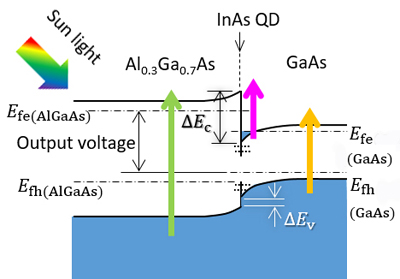 Solar cell based on hetero interface and up-conversion of 2-photon system.

Experiments have been taking place around the world to create various solar cell designs that can lift these limitations on conversion efficiency and reduce the loss of energy.

The current world record is at 46% percent for a four-junction solar cell. If the energy-conversion efficiency of solar cells surpasses 50%, it would have a big impact on the cost of producing electricity.

In order to reduce these large energy losses and raise efficiency, Professor Kita’s team used two photons from the energy transmitted through a single-junction solar cell containing a hetero-interface formed from semiconductors with different bandgaps. With these photons, they developed a new solar cell structure for generating photocurrents.

As well as demonstrating theoretical results of up to 63% conversion efficiency, the experiment achieved up-conversion based on two photons, which the team describes as “a mechanism unique to this solar cell”. Prof Kita commented,

“The reduction in energy loss demonstrated by this experiment is over 100 times more effective compared to previous methods that used intermediate bands.” 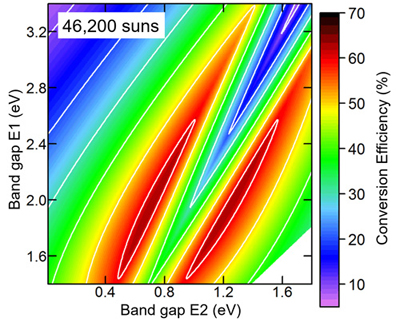 “The team has observed not only a dramatic increase in the additional photocurrent, which exceeds the reported values by approximately two orders of magnitude, but also an increase in the photovoltage. These results suggest that the two-step photon up-conversion SC has a high potential for implementation in the next-generation high-efficiency SCs.”

The team said it is planning to continue to design solar cells, and assess their performance based on conversion efficiency, working towards a highly efficient solar cell for low-cost energy production.