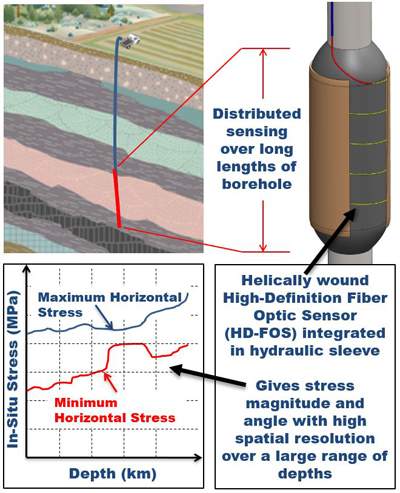 Luna Innovations, Roanoke, VA, has announced that, working in partnership with Shell’s GameChanger early-stage-technologies program, it has developed a new optical measuring technique for analyzing the stresses in subsurface rock. When deployed, this technique could provide critical measurements with unmatched consistency and depth resolution, allowing safer and more efficient well operations.

Businesses that rely on underground operations, such as the petroleum and geothermal industries, depend on accurate estimates of in-situ stress, refering to the existing pressure that exists underground before a hole is drilled. This affects drilling, surveying, and fluid injection (hydraulic fracturing, water flooding, CO2 sequestration) as well as phenomena such as fault re-activation and induced seismicity.

“The development of this new technology – using existing Luna fiber optic sensors and our ODiSI instrument – lets the oil and gas industry assess critical parameters that have otherwise been unmeasurable,” commented Scott Graeff, President and CEO of Luna. “We greatly appreciate Shell GameChanger for its support as well as its expertise in this industry. Together, we can show how the industry’s toughest test, measurement, and analysis challenges can be tackled with developments like CHISL.”

Luna’s CHISL sensor integrates fiber optic sensors into a flexible hydraulic sleeve, which applies pressure to a borehole wall until small longitudinal fractures are formed. Unlike hydraulic fracturing, where fluid flows into the fractures and causes them to grow in length away from the borehole, CHISL does not allow the fluid to flow into the induced fractures.

“A reliable estimate of in-situ stress is critical for many applications in oil and gas industry. For example, the success of hydraulic fracturing in shales greatly depends on the created fracture height, which in turn is strongly controlled by the stress variations with depth. Luna’s technology would allow stress depth profiles to be estimated with unprecedented resolution,” said Alexei Savitski, Geomechanics Subject Matter Expert at Shell.

“The maximum horizontal stress is one of the most uncertain subsurface properties and is usually inferred from other data. But CHISL would allow this uncertainty to be reduced significantly, which is critical for assessing the risks of fault re-activation and induced seismicity.”

The CHISL sensor will provide new kinds of data that can be leveraged to increase safety, production efficiency, and optimization of future subsurface engineered systems. Future field operations using a ruggedized sensor could yield in-situ stress measurements for unprecedented lengths of boreholes and in less time than traditional hydraulic-fracturing techniques. Apart from the stress profiling of rock formations for planning of hydraulic fracturing, other applications include caprock integrity sensing for oil wells and optimized drilling of complex oil wells.