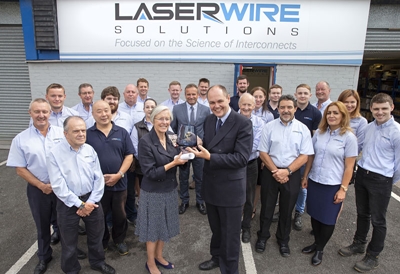 Once again, several UK companies offering expertise in photonics technology have been recognized with a Queen’s Award for Enterprise.

Winning a Queen’s Award for the third time, on this occasion for innovation, Optos has now sold more than 16,000 imaging systems worldwide. This year’s award was specifically for the company’s “California” retinal imager, which is used to help manage conditions including age-related macular degeneration (AMD) – the world’s leading cause of blindness.

“Optos is the only company in the world that provides ultra-widefield imaging technology, which gives a 200° view of the retina in a single capture,” claims the firm, which was acquired by Japanese imaging giant Nikon back in 2015 for £260 million.

As well as AMD, the company says that its technology provides optometrists and ophthalmologists with a bigger picture and more clinical information to help with early detection, management, and effective treatment of problems including retinal detachments and tears, glaucoma, and diabetic retinopathy.

Optos' CEO Robert Kennedy said: “The California device has continued to strengthen the position of Optos at the forefront of the global retinal imaging market. The innovative technology within the device provides superior imaging which had been demonstrated in over 600 clinical studies to aid the enhancement of patient care.”

Spectral sorting of nuts
Meanwhile, the UK subsidiary of Switzerland-headquartered Bühler Group won recognition for its hyperspectral camera system. It has been used to sort different varieties of nut, as well as identify defects in nuts from their spectral properties.

“The data was analyzed using statistical methods devised in-house to optimize design of filters in the cameras that would give the maximum detection of foreign matter from the product with minimum loss of good product,” explains the firm.

“The resultant equipment requires minimum adjustment in use, making it highly efficient. This innovative product has delivered strong sales growth for the company since launch.”

Swansea-based Lumishore is known for its LED-based marine lighting technology, which can now be found on anything from a small RIB to a superyacht.

Another serial winner, the company has won a Queen’s Award for the sixth successive year – this time for innovation, in the form of its “Louvre” LED lens development. Said to be the world’s only horizontally aligned underwater lighting system for superyachts, it features LEDs in stepped rows, with adjustable angles.

CEO Eifrion Evans said: “The award endorses our industry leadership and is recognition for Lumishore’s world-class design, development and manufacturing staff, who produce the best and most breathtaking lighting effects for prestigious yachts and boats of all sizes, worldwide.”

Used in the medical device industry, the company’s “Odyssey-4” system is based around an ultraviolet solid-state laser, and is able to strip wires from a diameter of 0.2 mm to just 0.02 mm.

The approach replaces mechanical scraping or hot chemical stripping techniques, while eliminating the potential for damaging the wire’s underlying metallic conductor – an increasing risk as wire diameters have become smaller.

Other devices benefiting from the approach include cochlear implants, hearing aids, and ultrasound cables. “Without this technology the process is purely reliant on a technician’s skill as manufacturers have to scrape away the insulation of the wires with a razor blade whilst looking at the wires through a microscope,” explains the company. “Poorly stripped wires could result in failure during use, risking a patient’s health and damaging the manufacturer’s reputation.”