Laser giant Coherent expects its financial performance to remain strong throughout 2011 as it begins to capitalise on the flat-panel display opportunity.

Coherent has posted positive results for its fourth fiscal quarter of 2010 as well as fiscal 2010, following the trend set by many companies in the past few weeks. In fact, it was difficult to find any negatives during a conference call where the words “record-breaking” were spoken with notable regularity.

“The only word that I can use to describe fiscal 2010 is extraordinary,” said Coherent’s president and CEO John Ambroseo. “We posted record revenue, record orders, record operating income, record pro-forma EBITDA and record backlog. We racked up a significant number of design wins in key markets and expanded our portfolio through targeted acquisitions. We have sustained solid cash flows and our balance sheet remains pristine.”

Net sales for the fourth fiscal quarter of 2010 were $166.4 million, a rise of 55% year-on-year, leading to revenues for the full fiscal year of $605.1 million. This is slightly higher than 2008 revenues and represents a growth of 39% when compared to fiscal year 2009. Geographically, Asia was said to represent around 36% of fiscal 2010 revenues, with this region expected to remain strong throughout fiscal 2011.

According to chief financial officer Helene Simonet, acquisitions made during fiscal 2010 accounted for approximately 4% of the annual growth. “Bookings for the quarter were $192.5 million, representing an increase of 6.6% sequentially and 44.3% versus the prior year period,” she added. “Bookings of $696 million for the full fiscal year were up 66% compared with fiscal 2009. We ended the fiscal year with a book-to-bill ratio of 1.16, a backlog of $262 million and a cash balance of $263 million.”

And momentum is continuing into fiscal 2011 with Ambroseo adding that Coherent will step-up its R&D project spending, principally to address some large flat-panel display opportunities. The company is also adding headcount, albeit “very selectively”, in response to the positive booking momentum. “We project our fiscal 2011 first quarter revenues to range from $171 to $179 million, the equivalent of approximately a 3% to 8% increase from the fourth quarter,” said Ambroseo. 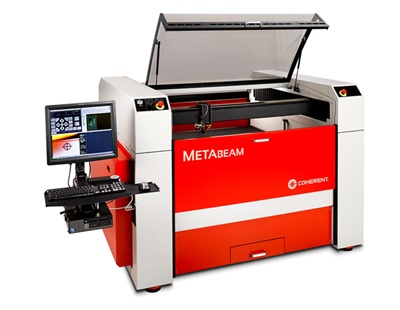 Microelectronics gold rush
Coherent breaks its results down into four sectors: scientific, OEM components and instrumentation, microelectronics and materials processing. Of these, the company reported large gains in the microelectronics sector with orders of $79.4 million for the quarter representing an increase of 8.1% sequentially and orders for fiscal 2010 of $291.3 million up 139.5% compared with the prior year.

“Over the past few quarters, I have been highlighting the opportunity for Coherent in flat-panel display manufacturing,” commented Ambroseo. “We capitalized on some of these opportunities in Q4 with a multi-unit order for LCD annealing systems for mobile and tablet displays and significant orders for lasers used in light guide plate manufacturing for LED-based displays. The combination led to the second highest bookings quarter ever and we’re about to crush these numbers in Q1.”

Ambroseo went on to tell investors that Coherent had recently received a multi-unit order for OLED manufacturing totalling approximately $37 million. Ninety percent of the order, which is compromised mostly of excimer lasers, will book in Q1 with the remaining 10% booking no later than Q2. “We’ve also captured a competitive account for panel welding that will add to the bookings gold rush in the first quarter,” he added.

As part of Coherent’s strategy to grow market share in Asia, it has inked an agreement to buy privately held Hypertronics in an all-cash-transaction. “Their strength is in the design and manufacture of laser and vision-based tools for flat-panel, storage, semiconductor and biomedical applications,” explained Ambroseo. “Their FPD business is particularly attractive given their relationship with leading Taiwanese accounts and will enable us to leverage the combined portfolio. The Singaporean and Malaysian operations will serve as a nucleus for laser manufacturing and repair in Asia.”

Growth across the board
Orders of $43.6 million in the scientific market were up 33.8% versus the prior quarter. For the full fiscal year, orders of $148.6 million were up 10.4% compared to fiscal 2009. These gains come from a mixture of both stimulus funding in the US and abroad as well as record orders for Coherent’s ultrafast Chameleon laser and the OPS platform being used as a pump source for a growing number of applications.

Quarterly materials processing orders of $21.8 million were up 53.7% versus the prior year period. “We are seeing a pick-up in orders for high power products and direct diode modules for use in cutting, welding and cladding,” said Ambroseo. “We remain on track with our high power fiber laser and have completed several important milestones including cutting metals with market-competitive speed and quality.”

Orders of $47.6 million for instrumentation and OEM components were up 3% from the prior quarter and 36.5% versus the prior year period. Ambroseo noted that Coherent’s OEM customers have also highlighted the rising importance of Asian customers to their business.

The only negatives this quarter were two unrelated batch failures of electronic components used in specific high-performance lasers. The corrupt material was said to have negatively impacted laser performance, reliability and lifetime but these issues are now resolved. Coherent is also still operating its epitaxial growth facility in Finland due to rising orders for diode and diode-pumped products. The company now plans to run the facility through the end of March 2011, after which it expects to begin decommissioning the remaining reactors.