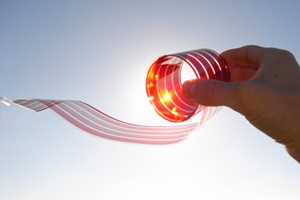 A UK start-up company with a strong pedigree in organic semiconductors has attracted £4.5 million in funding to develop photovoltaic applications of the technology.

Eight19, named after the time it takes for the Sun’s rays to reach Earth, is the latest spin-off from Sir Richard Friend’s research group within the highly regarded Cavendish Laboratory. The group is well-known for its groundbreaking work, and previous spin-offs include the organic LED company Cambridge Display Technology (CDT), and the electronic book specialist Plastic Logic.

The new capital is provided by the France-based materials company Rhodia and the UK’s Carbon Trust investment vehicle for low-carbon technologies, but, other than that, very few details about Eight19 itself have been released.

The company’s management team is currently led by COO Kieran Reynolds and CTO Michael Niggemann, along with lead scientists Kiril Kirov and Jurjen Winkel. When contacted by optics.org, Eight19 declined to reveal details of achieved conversion efficiencies or chemical stability. Dye-sensitized solar cells, which fall into the organic photovoltaics (OPV) category, have been shown to deliver a peak efficiency of 11 per cent, but have tended to suffer from poor stability in the past.

Pre-commercial
Nevertheless, OPV has the potential to be integrated within buildings to provide clean energy at a very low cost. The market is currently tiny and in a pre-commercial stage, but analyst firm Nanomarkets has predicted that this technology will command a market value of $500 million by 2015 - although this would have to be regarded as a speculative figure at present.

The appeal of OPV is that rolls of the energy-harvesting material could, in theory, be manufactured at an extremely low cost to provide electricity. Although conversion efficiencies for OPV are much lower than is found with cells based on conventional semiconductor material, a very low cost of production ought to largely offset that problem.

The present cost of electricity produced by conventional PV materials is one of the key barriers to its more widespread commercial deployment - even though the mainstream PV market is growing fast: Robert Trezona, Head of R&D at the Carbon Trust, said: “The launch of Eight19 and the deployment of low cost organic solar cells could help to revolutionize solar power production by opening up new markets,” he said. “Cost reduction through the development of advanced technology and innovative design are key to driving forward mass production and making solar power more affordable.”

Friend, a co-founder of Eight19, highlighted the key difference between OPV and more conventional approaches to solar, saying: “Solar cells made with organic semiconductors work very differently to those made with silicon and are closer in operating principle to photosynthesis in green plants.”