Green photonics: beyond PV and LEDs

European politicians and bureaucrats should be made increasingly aware of “green” manufacturing techniques, as well as PV and LED applications. 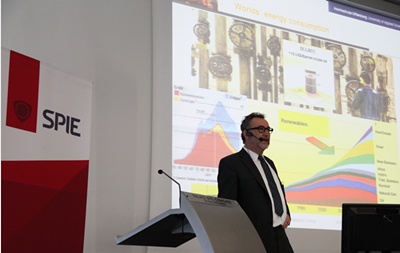 by Mike Hatcher in Strasbourg
If asked to consider the environmental credentials of photonics technology, the chances are that you will think first of clean energy generation through solar photovoltaics, or perhaps the energy-saving potential of solid-state lighting.

But those increasingly valuable applications are by no means the limit of the possibilities. And as the environmental agenda becomes more prominent in European politics – witness the Green Party’s recent victory in a key election in Germany’s Baden-Württemberg region – now looks like a good time for the photonics community to be highlighting these less obvious “eco-friendly” technologies.

One key area is advanced manufacturing, in which photonics-based techniques can produce stronger, lighter components, and ways to fabricate such components with a lower environmental impact overall.

As Trumpf’s Michael Lang noted at SPIE’s first “Eco-Photonics” conference in Strasbourg, France, this week, one highly evident trend is the way in which high-power lasers used in materials production have become dramatically smaller and more energy-efficient in recent years.

For example, the German company’s 3 kW HL3306 solid-state laser, which operated at wall-plug efficiency of only about 3%, has been largely replaced with the company’s TruDiode product. While the HL3306 consumed 92 kW of electrical power to deliver the rated output, the TruDiode can provide the same power while consuming only 9 kW, Lang says. He adds that, CO2 lasers apart, there has been close to an order-of-magnitude improvement in laser efficiency across Trumpf’s entire product range in recent years.

Disk scaling advantage
With the major advantage of having a lot less waste heat to dissipate, the improved designs also mean that the replacement sources are barely a quarter of the size of their predecessors. At Trumpf, much of the improvement has been a result of the company’s strategic development of thin-disk lasers. And improvements to those specific designs, where power output scales with the beam area, mean that Trumpf can now deliver as much output with a single disk (4 kW) as it did in 2005 with four separate ones – helping to also make the technology much cheaper.

Fiber lasers offer much the same advantage in terms of pure conversion efficiency, and although some fiber laser manufacturers will say that their lasers are the most efficient, and therefore “greenest”, of all, the reality is a little more complex. Both fiber and thin-disk lasers are highly efficient, with wall-plug efficiencies approaching 30%, because they are able to couple very efficient diode sources with an active medium very effectively. But exactly how efficient those lasers are depends on the precise nature of the operating conditions demanded by any specific application.

And, as Stefan Kaierle from the European Laser Institute pointed out in Strasbourg, energy efficiency is just one measure of a technique’s eco credentials. So perhaps it is unwise to get too hung up on who has the best efficiency figures.

Kaierle has been investigating ways to determine the overall environmental impact of laser welding applications in particular. But this is a trickier problem than it might at first appear. “We are only at the start of this investigation, and not much research has been done so far,” he said.

One of the areas that Kaierle has been looking at is the selection of parameters by which laser welding can be measured against more traditional approaches for their relative environmental impact. Early work has adopted a method first developed by the chemicals giant BASF. Here, the five key environmental indicators include energy efficiency, alongside harmful (non-CO2) emissions, occupational risk, materials conservation, and post-processing requirements. 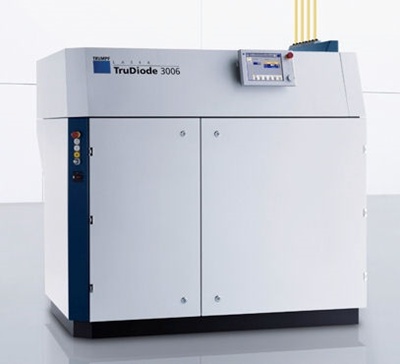 Early results
Though at an early stage, the results so far are a little surprising. For example in one application, a MAG welding technique turned out to be more energy-efficient than the laser alternative, although the laser option proved superior in the other four main criteria.

“In general, [laser welding] is no better or no worse than conventional welding,” Kaierle said. “It is not clean cut, and it depends on the specifics of the task.” In another test case, this time flange production, the laser welding approach turned out to have the best efficiency.

One of Kaierle’s key challenges now is to somehow find a way to weight the five main environmental criteria (a dimensionless index comparison is used at present), and then integrate other economic and societal aspects, to give an overall picture of the technique’s value and impact.

That will take time, but with some existing applications the benefits are immediately obvious. Trumpf’s Lang can already offer a wealth of examples where laser production technology is having a positive impact. In Strasbourg, he concentrated on two volume manufacturing applications at either end of the environmentalists’ hate-list – automotive and solar cell production.


Lasting impact
In the automotive world, any improvement that lasts for the lifetime of the vehicle will have a much greater overall impact, and so reducing the weight of a car body is of major importance. Lang says that using laser welding to create so-called “flangeless designs” means weight reduction, less material wasted in manufacture, and a lifetime of fuel savings.

With the “Euro 6” emissions standards for new vehicles coming into force in 2014, car manufacturers’ designs to meet the new legislation are well advanced. One of the ways in which laser machining is helping to meet the new targets is through drilling nozzles for fuel injection systems, a technique that exploits the advantages of a picosecond-pulsed beam to minimize any melting or heat damage.

Diesel engines face some tough reductions in meeting the new standard, and another picosecond application that machines a drainage canal in a diesel engine injector body is helping with the move to higher operating pressures – which in turn reduce fuel consumption. Ultrashort pulses are also good for surface structuring, and can now produce tribological surfaces that make engines run more smoothly and efficiently overall.

Of course, the more extreme environmentalist would rather nobody drove cars with petrol or diesel engines at all, and extol the virtues of electric vehicles, or even those powered by fuel cells. But again, laser production is key: the bipolar chrome/nickel plates that are used in a fuel cell do not generate much power individually, and so 400 of them – each one between 0.1 and 0.3 mm thick - must be welded together with high precision to provide enough drive power to turn the wheels of an average car. Lang says that the Trumpf TruFiber 300 is already meeting the requirements.

Solar cell production
When it comes to photovoltaic cells, lasers are already crucial in several specific manufacturing tasks, for both the market-dominating crystalline silicon technology, and thin-film alternatives based on CdTe or amorphous silicon.

Curiously, given the eco-credentials of photovoltaics, a crude sandblasting technique had been used previously for a border deletion step in CdTe cell production – meaning that the resulting sand had to be cleaned of the dangerous heavy metal elements. That is both hazardous and expensive, and thankfully a laser can provide a much cleaner solution.

With advanced aerospace applications such as laser metal deposition – which allows engine parts to be repaired, rather than completely replaced – and innovative parts made by laser additive manufacturing also now emerging, there is plenty more to come, says Lang:

“We are by no means at the end of the roadmap, and will see higher efficiencies and more power, with both short and long–pulse lasers,” he predicted. Lang also identified one of the main reasons why laser technology has not proliferated even more – the reluctance of engineers brought up on more conventional approaches, and their inherently conservative mindsets.

As younger engineers with early experiences of laser manufacturing technology come up through the ranks, that will no doubt change. But it is clear that photonics-based manufacturing already has plenty of environmental credibility, and will surely gain more as the technology improves. With the green movement in Europe, specifically Germany, making political advances, there has perhaps never been a better time to make those advantages abundantly clear to decision-makers in Strasbourg, Brussels and beyond.