An optical quantum computer is a step closer thanks to an electrically driven source of entangled photon pairs.

By embedding a quantum dot within a semiconductor LED structure, researchers in the UK believe that they have created the first electrically driven source of entangled light. Although the most likely beneficiary is quantum computing, entangled light can also be used for quantum imaging, which improves resolution, and for secure communications using quantum cryptography (Nature 465 594). 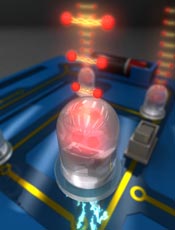 "We have generated entangled light using an electric current for the first time. All previous sources of entangled light used lasers to drive them," Mark Stevenson from Toshiba Research Europe told optics.org. "Our results represent the birth of electrically driven entangled light sources. We plan to develop the technology to maturity at which point we hope to develop a commercial version."

One of the major applications for an entangled LED (ELED) is in an optical quantum computer. These machines are designed to solve intractable problems very quickly owing to the massive parallelism gained by encoding information on qubits. Quantum computing, for example, could aid climate modelling and pharmaceutical research. Entangled light is required to operate a quantum computer, and the bigger the computer the more entangled light you need.

"As ELEDs are electrically controlled and many devices can be integrated on a single chip, they could meet these demands in a simple, compact and affordable way," commented Stevenson. "Although one could imagine a quantum computer running on laser-driven sources, the complexity and demands on space and maintenance for a large number of sources means this would be impractical."

The ELED is based on a single layer of InAs quantum dots embedded in a p-i-n-doped microcavity. The two critical design features were the thickness of the cavity and the energy of the emitted photons.

"When the cavity is thinner (like in typical single photon LEDs for example) we do not see any entangled light," commented Stevenson. "The energy of the emitted photons depends on the polarization. If the difference in energy for different polarizations is just a few micro-electron volts, i.e. one part in a million compared to their average energy, entanglement is lost averaged over time. We control this by growing quantum dots with a specific average emission energy. This can be reproducibly achieved by our collaborators at the University of Cambridge who grow the quantum dot samples."

Stevenson and colleagues demonstrated that their ELEDs emit entangled photon pairs under both DC and AC injection, the latter achieving an entanglement fidelity of 0.82. "We also had to modify the semiconductor structure to regulate the current and prevent additional charging of the quantum dot after the first photon is emitted, which destroys entanglement," added Stevenson.

Although the performance of the initial ELED device is good, the fidelity is not as high as the laser driven quantum dots developed by Toshiba. "We plan to take steps to improve this, and other aspects of performance such as the brightness of the emitted light," said Stevenson.