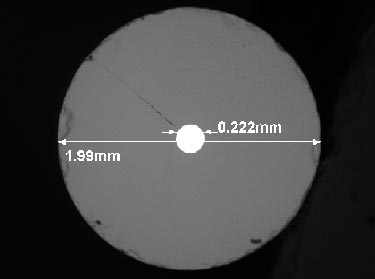 Researchers in the US believe that they are the first to fabricate a glass-clad optical fibre with a binary semiconductor core. The phosphate glass fibre contained a highly crystalline indium antimonide (InSb) core and was produced using conventional fabrication processes (Optics Express 18 4972).

"We can make practical lengths of fibre using commercially accepted production methods," John Ballato from Clemson University told optics.org. "The major hurdle was developing the fibrization conditions and the preform that permit good core uniformity and circularity. While this might look fairly easy on paper, it is very difficult to draw such dissimilar materials (semiconductor core and glass cladding)."

In previous work, the group has successfully fabricated fibres containing both silicon (Si) and germanium (Ge) cores. This new result takes things one step further as binary semiconductors such as InSb are more structurally complex.

"We chose InSb because, like Si and Ge, it is cubic and optically isotropic," explained Ballato. "It also has the lowest melting point of the binary cubic semiconductors and so we could try it at relatively low temperatures and without much vapour pressure."

"It sounds easy but one needs to consider the reactivity of the core melt with the cladding glass, the thermal expansion mismatch, and the vapour pressure," commented Ballato.

The InSb core fibres were drawn at 700 °C at a speed of about 0.5 m/min. In the present work, the team drew approximately 2 m of 2 mm diameter fibre with a core size of about 230 µm. Tests showed that the core was phase-pure and of high crystallographic complexity. Previous work by this group has shown that long lengths (> 200 m) of glass-clad crystalline core fibre can be fabricated using the approach employed here.

"In all cases, the quality of the core depends on the purity of the starting materials, the degree to which the cladding and core constituents diffuse into each other during the draw, and the differential thermal expansion mismatch that leads to stresses in the resultant fibre," said Ballato.

Ballato and his colleagues are now optimizing the cladding glass to better match the properties of the core materials and testing higher purity raw materials.

"This was proof-of-concept but we intend to commercialize the fibre once we are further along with performance," he concluded. "In this instance our starting InSb material did not possess very good transparency; so neither did the fibre. However, this work proved that binary semiconductors can crystallize from the melt in the core of a fibre."