Optical simulator is all about vision

Optometrists could benefit from a liquid-crystal device that corrects vision in both eyes simultaneously. 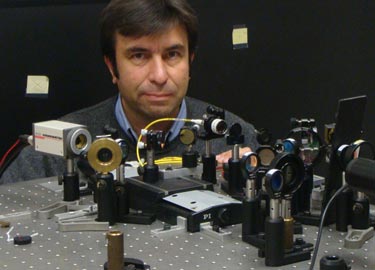 Researchers in Spain have developed an instrument that can measure and manipulate the optical aberrations from both of a patient's eyes simultaneously. They say that their device could be used to prescribe spectacles or contact lenses, as well as to simulate the effect of laser refractive surgery or any other advanced correction (Optics Letters 34 2628).

"We have built the first instrument capable of measuring and manipulating the optical aberrations from both eyes at the same time," Pablo Artal, a researcher in the University of Murcia's optical laboratory, told optics.org. "This system allows us to control what is natural in normal vision." 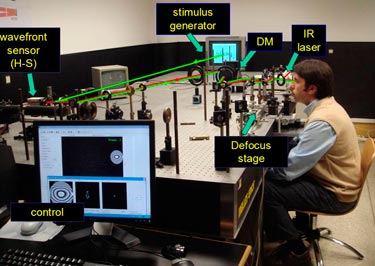 The Murcia team, which also includes Joshua Fernandez and Pedro Prieto, has built on previous work in which it developed the first closed-loop instrument to be applied in the eye in early 2000. The group saw it as a natural extension of this technology to develop a binocular device that could evaluate vision in both eyes simultaneously.

Dubbed the "binocular adaptive-optics visual simulator", the Murcia instrument comprises a single wavefront sensor and a liquid-crystal-on-silicon spatial light modulator. The liquid crystal corrects the wavefront of light entering a patient's eye by modulating incident light. This is achieved by locally varying the refractive index of the liquid crystal. 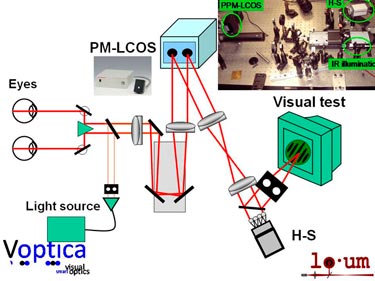 The molecules of the liquid crystal are rotated proportionally to the applied electric field induced by an array of independent silicon pixels in contact with the liquid crystal. A total of 58,000 independent pixels are used to control the wavefront of light entering each pupil. According to Artal, this approach provides more accurate control than deformable mirrors.

Routine eye examinations usually involve the use of a bulky spectacle frame into which different lens combinations are mechanically switched and adjusted with wheels until the patient can see clearly. By using adaptive optics, the mechanical wheels are replaced by the liquid-crystal corrector and the standard letter chart can be replaced with any type of image or scene.

Artal believes that this type of system has great potential to perform new experiments to better understand how the visual system works as well as simulate vision before a lens is implanted or surgery is performed. The team is currently working with Voptica, a Murcia University start-up company, to develop the technology for the benefit of patients worldwide.

"We are working in two directions," concluded Artal. "First, we are applying basic science to better understand how the optical properties of the eye affect normal vision. Second, we are building a more compact prototype and developing control software for an instrument with clinical applications."