A dose of multiwalled carbon nanotubes, plus a short exposure to NIR light, ramped the survival of tumour-bearing mice.

Thermal ablation – instigating cell death by heating tissue – offers a minimally invasive way to destroy tumours. While some cancer cells may be drug-resistant, all cells are sensitive to thermal therapy once the temperature is high enough. Radiofrequency ablation and high-intensity focused ultrasound, for example, are successfully used to thermally ablate a range of tumours. Now, US researchers have shown that multiwalled carbon nanotubes (MWCNTs) irradiated with near-infrared (NIR) light also offer highly effective thermal therapy. 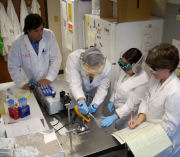 MWCNTs – micron-long, nested graphene cylinders with diameters from a few to hundreds of nanometres – vibrate on exposure to NIR radiation and produce heat that is localized to the target tissue. As NIR light penetrates several centimetres into tissue, many types of tumours can be ablated via this heating effect without requiring direct access.

"Nanomaterials deliver thermal therapy in a way that's less invasive than methods currently used for thermal therapy, such as radiofrequency ablation, and also offer the potential for the delivery of multiple rounds of therapy," said Suzy Torti, professor of biochemistry at Wake Forest.

Various nanomaterials – including gold nanoshells, single-walled nanotubes and nanohorns – are under early investigation for use in thermal therapy. "Our study explored MWCNTs because they offer advantages relative to other nanomaterials: they respond to a broader spectrum of wavelengths, and are more efficient absorbers of radiation," Torti told medicalphysicsweb. "We found them to be remarkably effective."

Torti and co-workers examined cultured kidney-cancer cells exposed to MWCNTs and illuminated with a 1064 nm laser at 3 W/cm2. Exposure for 30 and 45 s resulted in mean final temperatures of 53 and 62.7 °C, respectively – above the ablative temperature threshold of 50–55 °C. These treatments resulted in a 62-fold or greater reduction in viability, as measured by colony formation. Exposing cells to just nanotubes or just laser light did not affect cell survival.

The researchers then moved on to in vivo studies of mice with implanted kidney cancers. They injected MWCNTs directly into the tumours and treated the mice 24 hours later in the bore of 7 T MR magnet (to enable MR thermometry). After 30 s illumination, the average temperature of the MWCNT-loaded tumours was 74 °C, compared with 46 °C in control tumours exposed to light alone.

Following injection, the nanotubes remained relatively localized to the site of injection over long time periods. "However, we didn't assess this quantitatively or do extensive pharmacologic studies, so it's possible that some nanotubes may have migrated out of the tumour area," Torti explained. "There is a lot still to be understood about the properties of these entities in a biological context."

Next, the team examined 60 mice with implanted tumours, divided into groups that received: 100, 50 or 10 µg of MWCNTs; or (controls) laser alone, nanotubes alone or neither. One day after injection, the tumours were illuminated with NIR light for 30 s. All control tumours grew rapidly, indicating that neither light nor nanotubes alone affected tumour growth.

In contrast, the researchers saw a significant dose-dependent attenuation of tumour growth in mice treated with MWCNTs plus laser. At the highest dose (100 µg), the mean tumour volume at 30 days was 11 mm3, compared with 1472 mm3 in controls. The 50 and 10 µg doses also reduced mean tumour volume, to 354 and 590 mm3, respectively.

The growth inhibition translated into a significant survival advantage. Overall survival was significantly prolonged in each treatment group, with 80% of mice in the 100 µg group alive and tumour-free more than three months after a single 30 s treatment. In the 50 µg group, 60% remained alive, while 20% survived in the 10 µg group.

The control groups exhibited median survivals of between 23 and 25 days, while survival in mice treated with 10 µg of nanotubes plus laser was 29.5 days. Median survival could not be calculated for the two highest-dose groups, because too few mice died after treatment. However, median survival for mice in these groups was extended to at least 300 days.

As the toxicity induced by carbon nanotubes is a concern, the researchers also examined the long-term effects of this treatment on mouse organs. They observed no major toxicities and only transient local skin injury in more than six months of follow-up. Specifically, multiple organs (lungs, liver, spleen, skin, kidneys and brain) did not show evidence of nanotube-induced injury or inflammation.

Torti points out, however, that it will be some time until such materials are used in humans. The team is working on pharmacology and toxicology studies of the nanotubes to progress their development. "In addition, we would like to look at whether outcomes can be improved with multiple treatments. We would also like to explore systemic administration, effects of nanotube modification and perhaps some targeting strategies," she said.