Researchers and industry will need to work closely together if Europe is to maximize the returns on its investment in a planned new generation of high-power laser facilities being built over the next decade. Caryl Richards reports on the challenges and opportunities of big science. 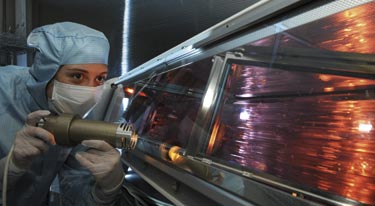 It's got the power

Europe is thinking big – big lasers, big science, big budgets. Over the next decade, a trio of planned pan-European research facilities will give scientists access to unprecedented laser powers and intensities, opening the door to exotic science that will shed light on the origins of the universe and, it is hoped, provide the foundations for a sustainable energy future.

The overall construction cost for this new generation of "super lasers" is in excess of €2 bn, with operational budgets running to several hundred million euros per year. That's a price worth paying, says Christian Kurrer, research programme officer at the European Commission.

"International infrastructures attract the best research scientists," Kurrer told delegates attending the "Emerging European Laser Facilities: Beyond Petawatt" workshop at the recent SPIE Europe conference in Prague, Czech Republic. "The infrastructures are well beyond the man-power and financial resources on a national level. This is why we need more collaborative efforts."

One of those collaborations is the High Power Laser Energy Research (HiPER) facility. Headed up by the UK Science and Technology Facilities Council (STFC), a research funding body, HiPER's mission is to carry out proof-of-principle research into energy generation from laser-driven inertial-confinement fusion. The grand challenge: to initiate and study nuclear-fusion reactions via laser heating of a millimetre-sized fuel pellet (containing a mixture of deuterium and tritium) to temperatures greater than 100 million °C.

Although construction of HiPER is not slated to begin until 2014, the process of whipping existing laser technology into shape to deliver a light source with the requisite capabilities is already under way. "Current laser capability has reached its culmination in the petawatt (1015 W) scale," observed Mike Dunne, project director of HiPER and a senior scientist at the Rutherford Appleton Laboratory (RAL), UK. "We're looking at how to take it [the technology] to the next generation." 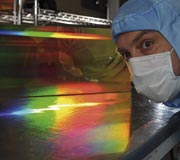 This is the purpose of the three-year preparatory phase on HiPER, which is running alongside initial experiments at the US Department of Energy's $4 bn (€3.1 bn) National Ignition Facility (NIF) in California. (As with HiPER, the end-game for NIF, a huge facility consisting of 192 pulsed laser beams with a total energy of 1.8 MJ, is the creation of nuclear fusion in the laboratory.)

Dunne anticipates that progress at NIF over the next few years will shape the future of HiPER. "[NIF] will prove the scientific principle [of laser fusion]: you get more energy out than you put in. We believe we now need to back that up with a whole bunch of technology that can exploit that science." What he's alluding to here is big science that could one day, after decades of endeavour, open the way to a fundamental reinvention of large-scale power generation.

Another major European laser facility in the works is the Extreme Light Infrastructure (ELI), a project that's being led by scientists at the Laboratoire d'Optique Appliquée (LOA) at the Ecole Polytechnique, Palaiseau, France. Scheduled to fire up in 2015, ELI will enable fundamental science to be carried out at the very highest laser powers (in the exawatt regime, 1018 W) and intensities (1024  W/cm2).