Optical nanolithography receives a boost as researchers claim that their new approach is a major step forward in generating arbitrary nanopatterns. 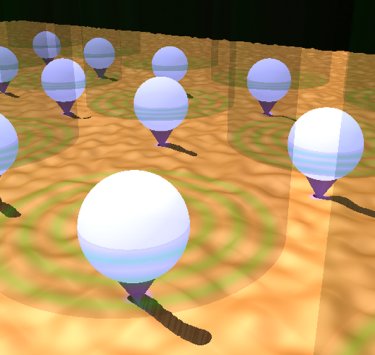 Researchers at Princeton University, US, have unveiled a parallel process that writes patterns of nanoscale features directly into a substrate. Their simple optical technique uses one laser to trap an array of microlenses and then another to fabricate 100 nm structures with both a feature size uniformity and relative positional accuracy of 15 nm (Optics Express 17 3640).

"The big leap is the production of parallel arrays," Craig Arnold from Princeton's Department of Mechanical and Aerospace Engineering told optics.org. "Due to the ease of trapping and producing the arrays, it could be possible to produce a low-cost nanolithography tool that would be able to write features of different sizes simultaneously and complex patterns in different materials all with high throughput and without any special equipment."

Nanolithography is the branch of lithography that deals with feature sizes of 100 nm or less. As the need for features on this scale becomes increasingly important for many applications, researchers are pioneering a number of ways to produce nanoscale patterns.

The Princeton group has concentrated on optical methods of direct-write nanopatterning, which, although are very flexible, have to date been limited by the slow speed and throughput of the system. Its aim was to develop a commercially viable technique that overcomes these faults, while at the same time remaining cost effective, easy to implement and user friendly.

The approach taken by Arnold and his colleagues involves the use of two separate laser systems: a trapping laser and a processing laser.

The trapping laser emits at 1064 nm and runs continuous-wave. It is passed through an axicon to generate a Bessel beam that is then split into four parallel beams by two Mach-Zender interferometers. Each Bessel beam carries approximately 150 mW of power and is used to trap a single 0.76 µm diameter microsphere.

The processing laser is a 355 nm source emitting 15 ns pulses with energies in the range of 150 nJ to 8 µJ. Patterns are drawn by moving the polyimide substrate relative to the optical traps.

"We can manipulate the microspheres and fire the pulsed laser when we want to modify the surface underneath the sphere," explained Arnold. "Near-field effects allow us to focus light to much smaller than its wavelength. However, to do this we have to be able to very accurately control the distance between the bead and the surface."

Arnold says that finding a way to position the microspheres close to the substrate's surface was a significant hurdle. The key thing that makes this possible is the Bessel beam optical trap.

"The Bessel beam creates a 2D trap that confines the microsphere in the x-y direction, but continues to push it towards the surface," he explained. "As the sphere gets close to the surface, a repulsion force develops that balances the scattering force of the light. The sphere achieves an equilibrium spacing very close to the surface, but not touching it. The relative position can then be easily controlled by varying the trapping laser power."

According to Arnold, this approach has several advantages. For example, there is no need for any active feedback to control the position of the spheres. It is also easy to remove, replace or change the sphere and different shaped or sized spheres could be trapped to produce multiscale patterns.

The team is now working to improve the accuracy of its technique and to decrease the feature sizes that can be produced. Another option is to introduce a spatial light modulator into the set-up to make larger arrays.