Detecting colour on the nanoscale

Nanotube-based devices developed by Sandia in the US mimic human vision. 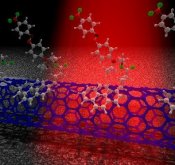 Scientists in the US have copied the way the retina sends electrical signals to the brain in order to construct nanoscale colour detectors. The devices, composed of carbon nanotubes decorated with photosensitive molecules, can detect very weak sources of visible light at specific wavelengths and could have applications in astronomy and biology.

The ability to detect photons over just a few square nanometres is useful in studying light sources that are either very weak or very small. To date, researchers have attempted this largely through the construction of solid-state devices, which produce electron-hole pairs when illuminated. However, building such devices with nanoscale precision is extremely difficult.

Xinjian Zhou and colleagues at the Sandia National Laboratories in California are taking an alternative approach, which is similar to the way that retinal molecules absorb light and then convert the light into electrical signals. This involves coupling light-sensitive molecules to transistors made from single-walled carbon nanotubes, rolled up sheets of graphite with a diameter of around 1 nm, and measuring the change in conductance of the nanotubes when the molecules absorb photons and change shape (arXiv:0902.2231).

Other researchers have demonstrated this effect using a variety of photosensitive molecules, but until now have only been able to detect light outside the visible spectrum. Zhou’s group has extended the technique to visible wavelengths, and has shown how wavelengths within specific narrow bands can be detected.

Zhou and colleagues did this using “chromophores” — molecules that generate colour — based on the compound azobenzene (consisting of two rings of carbon and hydrogen atoms similar to benzene). To build their nanoscale detectors they attached carbon nanotubes to a 10–cm long silicon wafer, evaporated electrical contacts onto the wafer, and then immersed the wafer in a solution containing the chromophores, which then attached themselves to the nanotubes.

By combining their experimental results with theoretical calculations, the Sandia group concluded that a change in geometry of the chromophore molecules brought about by illumination alters the chromophores’ electric dipole moment, which in turn creates an electrostatic potential on the nearby nanotubes, effectively changing the gate voltage of the nanotubes and thereby regulating their conductivity.

According to Zhou, the work could provide important insights into basic science, by using nanotubes to study how individual molecules respond to light and change shape. He also says that, if they can be made to work at slightly longer wavelengths, their nanoscale optical sensors could be used as ultrasensitive infrared detectors on telescopes, in order to image distant objects. In addition, he believes that one day the devices might be used to sequence genes. A single strand of DNA laid across an array of nanoscale detectors could in principle, he says, be sequenced if each detector picks up the light from the florescence tag on an individual base.

Commercializing the nanoscale detectors, says Zhou, depends on overcoming the hurdle currently confronting many applications of nanotechnology — being able to assemble nanoscale objects over large areas in a controlled way. “Adding the chromophores to the nanotubes is not difficult, neither is the integration of electronic components for the signal detection,” he adds. “But if only we could have a perfect array of nanotubes with the desired properties.”