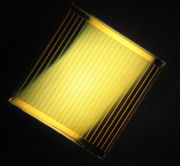 A new record for energy conversion efficiency in thermo-photovoltaic (TPV) cells has been set by a UK consortium led by CIP Technologies, a developer of photonic hybrid integrated circuits and InP-based optoelectronics. The new single-junction cells demonstrate energy conversion efficiencies of up to 12%, compared with 9% from existing commercially available devices.

The consortium is now working on a second-generation cell design with a more complex multi-layer construction that will improve infrared capture even further. This is expected to extend energy conversion efficiencies to more than 15%.

TPVs are similar to solar cells, but operate at infrared rather than visible wavelengths, generating electricity directly from heat. "They address a completely different market," Andrew Bridges of CIP told optics.org. "Like solar PVs, bandgaps are tunable to a degree, but TPVs are optimized for longer infrared wavelengths, giving them application in areas where a ~2000 K blackbody spectral emission is available."

This could include applications in domestic boilers, Combined Heat and Power (CHP) plants, glass manufacture and blast furnaces. The higher photon flux in such environments leads to higher electrical output from the cells. "Output can be greater than 1 W/cm2 without a concentrator," commented Bridges. "TPVs could be applied in any area that has visibility of a suitable blackbody source and a means to limit the temperature of the cells themselves."

CIP believes that the new cells can be used as an extra physical layer in existing applications to deliver high-quality electrical energy at close to 100% marginal efficiency. "A TPV assembly fitted into the heat exchanger of a domestic boiler will use some infrared photons in the TPV process, but allow the rest to pass through to the heat exchanger as normal," explained Bridges.

The key advance in the new cells is the application of CIP's expertise in indium phosphide (InP) materials. "Earlier research into TPVs was generally based on germanium, which has lower efficiencies, and gallium antimonide, which is more expensive," said Bridges. "There is some proprietary technology in our design and manufacture, but it is based on well understood, reproducible and scalable technologies."

The new cells were developed in a programme part-funded by the UK Technology Strategy Board/EPSRC, in partnership with Wafer Technology and Oxford University. CIP is leading the commercialization of the technology. "We believe that the consortium is presently at the forefront of UK research in this field, and that we have the highest efficiency InP TPV chip commercially available to the market worldwide," said Bridges.