Nanopositioning: how to make the right choices

The range of nanopositioning solutions on the market is broader than ever before as applications continue to drive the technology. Stefan Vorndran of PI outlines the options.

For many of today's optical applications, traditional positioning systems based on ballscrew drives or electromagnetic linear motors are not the answer. As new applications continue to demand faster and more precise motion control systems, manufacturers have had to dig deeper than ever before to keep pace.

Until recently, piezoelectric-based positioners offered sub-nanometre precision but only over very short motion ranges. Now, progress in piezo ceramic actuator and motor design, as well as control technologies, has solved this conundrum and users have a wide selection of piezo actuator devices to choose from. This article looks at the applications that have driven the development and the variety of piezo technology that is on the market.

Medical imaging
Semiconductor applications that use e-beam lithography and scanning electron microscopes have driven the development of fieldless and compact piezo devices that can be positioned anywhere inside a machine without causing negative effects. Recently, the medical market has started to adopt piezo systems and is benefiting from years of refinement in other industries. 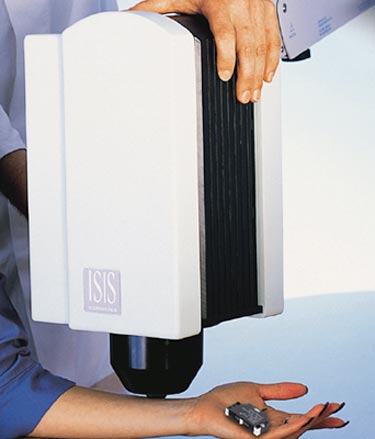 Scanning microscopy
In drug discovery, a multitude of samples has to be examined in the shortest possible time. Techniques such as fluorescence imaging are employed and require precise focusing on small amounts of liquid, usually held in multiwell plates (see figure 2). 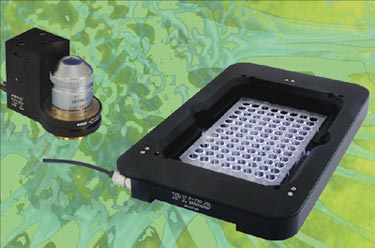 For long-range, well-to-well positioning, conventional electric motors or voice-coil drives can typically provide the required speed and precision but the focusing is best achieved with frictionless, piezo flexure stages or objective positioners. Response times on the order of a few milliseconds allow extremely fast focusing and rapid data acquisition. The fast response also reduces the risk of photobleaching caused by long-term exposure.

Industrial metrology
In many of today's industrial production and testing processes, dynamics and throughput are paramount. In disk-drive head/media metrology applications for example, sub-nanometre steps need to be executed and settled to nanometre tolerances in a matter of milliseconds. But in order to test an entire disk, travel ranges in the centimetre range are needed. 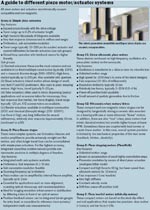 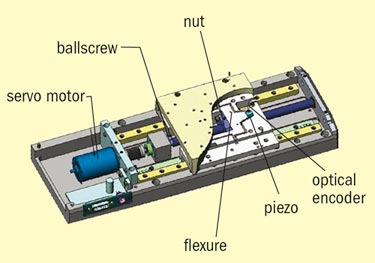 Astronomy
Many optical alignment applications in astronomy would benefit from actuators that simultaneously provide millimetres of backlash-free travel at nanometre resolution and can hold a position against large forces without drift and heat dissipation over long periods of time. These dual requirements were impossible to meet until a robust piezo motor based on the PiezoWalk linear actuator principle became available.

As with all piezo motors, PiezoWalk drives are inherently vacuum-compatible and fieldless, with force generation to 600 N and nanoscale power-off position stability. When arranged in a parallel kinematic hexapod design, they can provide motion in six degrees of freedom (see figure 4). 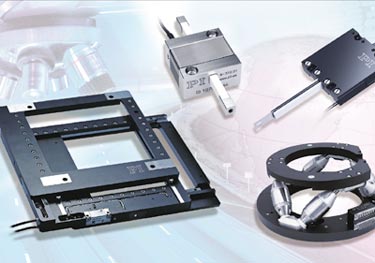 The hexapod approach with its virtual pivot point and available large central aperture is suitable for optical alignment problems as large as secondary mirrors in the latest generation of astronomical telescopes and as small as fibre-to-photonic-component-alignment in telecommunication chip production.

Autofocus cameras
Another use of piezo ceramics technology is in ultrasonic piezo motors. These are composed of monolithic piezo ceramic slabs electrically stimulated to drive standing waves in the substrate at high frequencies. The latest ultrasonic linear motor implementations come in sizes as small as 8 mm, achieve velocities to 800 mm/s and can provide unlimited travel ranges while maintaining submicron resolution. 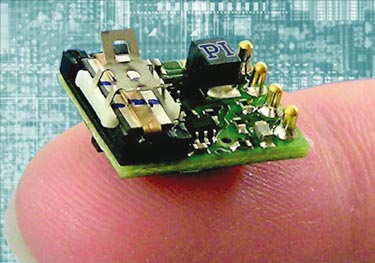 Conclusion
Piezo ceramic motion systems have long been the number one choice for ultrahigh precision motion. With the ever-increasing requirements from the optics, biotechnology and semiconductor industries, manufacturers were forced to find ways to overcome limitations such as travel range and linearity while preserving their unmatched speed, acceleration and resolution capabilities.

With the abundance of choices available today, it is more important than ever for the vendor to understand the user's application and its requirements on dynamics and precision as well as the control and interfacing preferences of the customer. If the user is willing to do a little homework and engage in a dialogue with a credible manufacturer, the result will be a significant step forward from what was feasible just a few years ago.

• This article originally appeared in the July/August 2008 issue of Optics & Laser Europe magazine.