German researchers have developed 37.6% efficient triple junction photovoltaic cells for use in highly concentrated sunlight, which they say match state of the art cells under these conditions. The Fraunhofer Institute for Solar Energy Systems (ISE) team also says that these cells are the most efficient produced in Europe.

Whereas the 40.7% record set by US company Spectrolab used lenses that concentrate sunlight 240 times, Fraunhofer ISE's cells perform best at a concentration ratio of 1700. This should reduce the cost of concentrator photovoltaic (CPV) modules, as the higher concentration optical systems can focus light onto a smaller total area of compound semiconductor cells.

"The cell still runs at higher than 1700 suns," said Andreas Bett, project leader for the ISE team. "We couldn't measure higher because our set-up doesn't work at higher concentrations."

The cells are now being transferred to the ISE's production partner Azur Space, where they will be in commercial production "within months". Bett anticipates a smooth handover, as ISE used the same type of Aixtron system to develop the cells as Azur Space will use to manufacture them.

"We are looking at not only our highest efficiency but a reproducible, very stable process," he told compoundsemiconductor.net. "That's really good because the yield will be very, very high – I'm expecting higher than 95%."

Central to ISE's record were the thin tunnel diodes positioned between its device's GaInP top cell and GaInAs middle cell, and also between the middle cell and the germanium bottom cell. Extensive computational modelling allowed the overall epistructure to accommodate 30 nm-thick diodes featuring AlGaAs layers that are carbon-doped at levels up to 1020 cm–3. 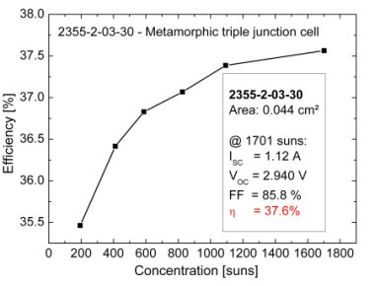 "This is especially challenging for metamorphic triple-junction solar cells," explained Frank Dimroth, head of ISE's III–V epitaxy and solar cells group. "Carbon-doped AlGaAs is usually not well lattice-matched to the GaInAs material used as the second junction in this high-efficiency solar cell."

However, ISE's modelling approach has helped it to produce a device that includes highly carbon-doped AlGaAs in a better lattice-matched, higher quality crystal structure.

To further highlight their effectiveness, these latest cells have already been included in a CPV module that operates at 28.5% efficiency. Bett says that cell efficiencies can near 45% in the future, and that this will help module efficiencies approach 35%.