euroLED puts the spotlight on lighting

Solid-state illumination is the future of the entire lighting industry, said Geoff Archenhold, the founder of the euroLED event, as he kicked off this year's conference and exhibition. 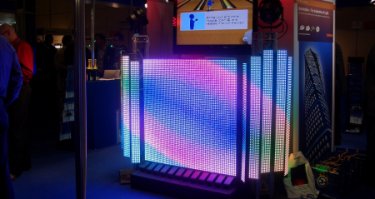 Billed as Europe's premier event for the solid-state lighting market, this year's euroLED is expected to attract around 1000 visitors for the two-day event. "We are at a new venue this year because of the record number of delegates, coupled with 75 exhibitors," said Archenhold. "SSL has seen incredible growth. Some of today's key challenges are to meet the expectations of the general public, and to deliver our promises."

These sentiments were echoed by many of the presenters at today's conference sessions. Setting the scene, Bob Steele of market analysts Strategies Unlimited offered an insight into his latest high-brightness LED (HB LED) market overview and forecast.

Steele attributes the slow growth phase to the price erosion of LEDs for mobile appliances, but believes that this is less of a factor in today's marketplace. He is also expecting to see a healthy growth in demand from all other applications. "In terms of absolute dollars, the growth in 2007 came from signs and displays ($175 million) and illumination ($130 million)," he commented. 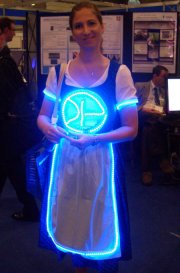 Steele also highlighted the emerging opportunities for white LEDs in automotive headlamps, and for backlighting LCD screens. "We are seeing tremendous momentum in the computer market, especially in small notebooks," he said. "Most big names now have products that use a white LED backlight. The main drivers are saving battery lifetime and the slim profile that can be achieved. There is also no mercury involved. The Apple MacBook Air couldn't have been done without LEDs."

Steele concedes that some issues remain. For a start, LEDs remain more costly than cold-cathode fluorescent lamps (CCFLs), although Steele expects parity within the next couple of years. The colour gamut is also poor, but this is not so important for laptop computers that are only being used for word processing and e-mail.

Steele identified Samsung as the clear leader in the LCD backlighting market, although this could change as the market develops. The Korean company currently offers three different types of LED-based displays, one for a monitor and two for televisions. Local dimming of the array of LEDs that make up the backlight is the key factor in this emerging application.

In the automotive market, three high-end luxury cars already use LED headlamps: the 2008 Lexus LS 600h, the 2008 Audi R8 and the 2008 Cadillac Escalade Platinum. "Styling is the key here," said Steele, who described the Cadillac as having "unconventional styling". "It's all about what LEDs can let you do. Penetration in this market will increase and we expect to see LED headlamps being used in mid-range cars in several years."

Lighting the way
Steele concluded his talk with a brief look at solid-state lighting, a market that was worth $330 million in 2007. Architectural lighting remains the largest and most established market segment, while other important sectors identified by Steele include channel letters, and residential and off-grid applications. Although the use of white LEDs is growing, coloured LEDs remain dominant in this sector. 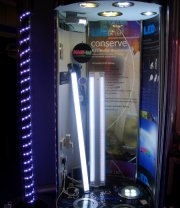 "Energy efficiency is the main driver moving LEDs into the general (white) lighting market," concluded Steele. "Lifetime is also important as products must deliver value on a cost-of-ownership basis. Both of these factors must be proven to win customer acceptance. Government subsidies and regulation will be important for early stage market development."

Next onto the stage was Steve Landau of Philips Lumileds, who posed the question: "When will LEDs start to transition into general lighting?". The simple answer, Landau said, is that they already have, with 2007 representing the tipping point. However, he cautioned that companies must truly understand the application and the expectations of the end user.

"We must look at the values end users hold dear to make real progress," said Landau. "These are factors such as safety, dependability, control and environmental impact. The end users may not specifically want LEDs, they just want a product that meets these criteria. We need to understand the customer's motivation for buying the product."

Landau illustrated his point with two examples. "With traffic signals the original motivation is total cost of ownership," he said. "With street lighting it is cost and the environment. Compelling differentiation is not the motivation. Our Luxeon street lamp demonstrator delivers an energy saving of over 50% compared with mercury vapour lamps and directs light more effectively at the street."

Efficiency counts
Next to jump on the efficiency bandwagon was David McAuley of Sustainable Energy Ireland (SEI), an agency set up in 2002 to promote and assist the development of sustainable energy. Essentially acting as Ireland's national energy agency and tasked with implementing policy, SEI's mantra is "Energy Efficiency First".

SEI's vision is for every lighting application to be effective and energy efficient. To achieve this, SEI aims to engage with and educate all levels of the supply chain — from manufacturers and suppliers right through to electricians.

One initiative it is currently working on is a reference manual that explains jargon and gives practical examples that illustrate how specific market sectors can use lighting in an effective and efficient way. For example, the manual offers advice on the types of lighting fixtures that are available to the retail sector so that light can be directed at displays in an optimal fashion.

SEI has also developed an energy management standard called IS 393 and has been working with large companies throughout Ireland, such as Intel, to help them achieve this standard.

McAuley also discussed an initiative called "Accelerated Capital Allowance", which has been introduced this year. "We have set minimum performance criteria for light sources such as LEDs," he explained. "Suppliers can register their products and self-certify that the product complies with the criteria. Anyone buying these products can then write the capital off against tax in one year."

Time for technology
In a day packed with presentations looking at market perspectives, there was still time to talk about recent developments in materials, components and systems. Topics under discussion included thermal management, chip and packaging technologies and LED phosphors. Particularly interesting was a talk by James Harris, a scientist at UK firm Nanoco, who described how quantum dots (QDs) can be used to produce white LEDs.

"We are one of only a few companies who can supply non-toxic, cadmium-free quantum dots," said Harris. "These are tunable, since changing the size of the dot's core determines the emission wavelength. We can produce QDs emitting at all visible wavelengths that have a high quantum yield and a narrow FWHM. An outer organic layer affects the solubility of the QD."

To produce a white emitter, Nanoco combines both red- and green-emitting QDs with a GaN LED in what it calls a "single-chip" solution. One potential application is LCD backlighting, and Nanoco has already teamed up with a Japanese company to investigate this prospect.

"The QD peak emission can be tuned to the maximum colour filter transmission," explained Harris. "QDs with a low FWHM are ideal. Our devices have a FWHM of 70 nm and we are trying to reduce that value for this application. We also need to work on maintaining the QDs' spectral output over time."