Optical atomic clocks have the potential to measure time with unprecedented precision. Marie Freebody speaks to experts John Kitching and Leo Hollberg to find out more. 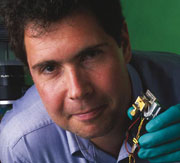 John Kitching and Leo Hollberg are physicists in the Time and Frequency Division of the National Institute of Standards and Technology (NIST) in the US. John Kitching has fifteen years of experience developing advanced atomic clocks. Most recently, his research group has pioneered the development of miniature atomic frequency references. Leo Hollberg's expertise lies in high-resolution optical spectroscopy and optical frequency standards and he currently heads up NIST's optical frequency measurements group.

Can you summarize how optical atomic clocks work?
An atomic clock keeps time by monitoring electromagnetic oscillations of atoms. Much like a pendulum in a grandfather clock, the electromagnetic fields of certain atomic species can be excited into periodic motion at well-defined resonant frequencies.

Firstly, laser light is used to cool and slow atoms that are travelling at around 300 m/s at room temperature. By cooling the atoms to less than 1/1000th of a degree Kelvin they can be held in a trap and probed with microwaves or in the case of optical clocks, with light. Oscillations of atoms are triggered when the frequency of the probe laser exactly matches the energy difference in quantum states within the atom.

Why is it important to pursue the development of this technology?
For decades, atomic clocks have been the most precise instruments for measuring time intervals for longer than a few seconds. Since every atom of a given species is identical, a correctly constructed atomic clock built in the US, for example, will keep identical time to one built in Europe. This allows for a universal definition of time intervals: the International System of Units: the SI "second" is the time taken for a caesium atom in the clock state to undergo 9,192,631,770 oscillations.

What are the main applications and when do you expect them to occur?
Currently optical clocks are only being used in laboratories to explore new science as they are too large, expensive and power-hungry for many applications. They require several laser systems to cool and trap the atom and to resolve side effects such as unwanted quantum transitions. They also require optics to prepare the laser beams and a vacuum chamber to insulate cooled atoms.

There have been proposals to put optical clocks in space to perform fundamental physics experiments or for imaging, but that would first require substantial investment to tackle the associated size, weight, power and reliability issues.

What would you say is the most important recent advance?
Until recently, almost all atomic clocks were based on microwave transitions in atoms, which have frequencies in the range of 1–10 GHz. There is a huge advantage to be gained by using optical transitions, which have frequencies 100,000 times higher. For many years optical clocks were extremely complex instruments requiring several rooms of apparatus to operate. This was due to the difficulty of coherently dividing the very high optical frequencies down to the useful range of a few gigahertz.

In 1999 it was proven that optical frequency combs (OFCs) could be used to perform this frequency division extremely precisely. A single femtosecond laser could then replace the multitude of lasers that were originally required, making the optical clock simpler and simultaneously more precise. It is likely that the optical clocks of the future will enable timing at a level of 10–18 fractionally, the equivalent of 1 s every 100 billion years. This is a projection of how performance could be improved based on the advancements of the past 20 years. By further improving OFC techniques and the stability and efficiency of lasers, many believe that this level of performance is achievable.

What are the key challenges left to overcome in this field?
With enough money, one could decrease the size, weight and power requirements of optical clocks using known technologies such as more efficient lasers and nonlinear optics. Currently, however, there is no driving force to do this. As a community we need to create this force by investigating applications that would benefit from high-precision optical clocks.

What do you expect the next big breakthrough to be?
Much of the current research on atomic clocks deals with a single figure of merit – the accuracy or precision. While this is certainly important, big breakthroughs often occur by asking different questions. Would it be possible to make an atomic clock that ran for centuries without needing any external power? Could precise timing be achieved using atoms in the air around a simple antenna? Maybe timing of the future will be done with large numbers of imprecise clocks networked together rather than a small number of highly precise ones?

• This article originally appeared in the April 2008 issue of Optics & Laser Europe magazine.