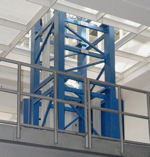 A production facility focused on developing passive and active fibres for high-power, high-brightness materials processing applications has opened in Stuttgart's Institut für Strahlwerkzeuge (IFSW). The goal is industry-compatible solutions that address both single- and multimode applications.

The IFSW received funding totalling €1.825 m for the new facility from the state of Baden-Württemberg in Germany and from other national funding organizations.

"The goal is to produce new fibre structures that deliver multikilowatt fundamental mode laser radiation over distances of 10–100 m for materials processing applications," Thomas Graf, director of the IFSW, told optics.org. "The fibres will also be used for the generation and amplification of high-brightness fibre lasers with average powers in the multikilowatt range. We will also work on flexible, high-power beam delivery of pulsed and continuous-wave high-brightness radiation such as that produced by fibre or thin-disk lasers."

Currently, the facility consists of a 10 m-high drawing tower and will be joined by a modified chemical vapour deposition pre-form production lathe in autumn 2008.

Specific properties of fibres will also be investigated by the facility. "Characteristics such as sufficiently low bending sensitivity with high enough threshold for non-linear stimulated processes such as Raman or Brillouin scattering will be explored," commented Graf. "Another important aspect that will be explored in both passive and active, high-power, singlemode fibres is the preservation of linear or azimuthal polarization."

According to Graf, the optimization of fibre properties is an iterative process of design, fabrication and characterization that benefits from access to an in-house production facility.

He continued by adding that there is no formal process established to qualify potential partners. "The facility can be used by industrial and scientific partners within research collaborations such as common funded or bilateral projects or subcontracts, and we encourage all interested companies or institutes to contact us," he said.