VTT Technical Research Centre of Finland and Suss MicroTec have developed a nano-imprinting stepper that paves the way for improved production of technologies such as solar cells.

A partnership between VTT of Finland and Suss MicroTec of Germany has developed what is described as the "most versatile" nano-imprinting stepper available on the market. The stepper and associated manufacturing methods together form the enabling technology for rapid, low-cost production of flexible solar cells and nano-scale bioanalysis platforms known as "labs on a chip". 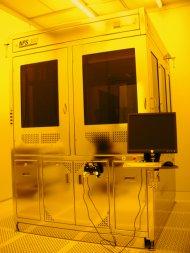 The stepper has been developed within the framework of the EU's Emerging Nanopatterning Methods project. VTT is already using a prototype of the NPS300 stepper at its laboratory in Micronova in Espoo, Finland.

Based on Step and Stamp Imprint Lithography (SSIL), the stepper uses a patterned chip as a stamp, and the stamp pattern is transferred to a polymer layer by imprinting. The stepper enables multi-layer imprinting on substrates of both thermoplastic and UV cured materials, while the patterned polymer layer can also be used as an engraving mask when printing patterns on silicon or quartz.

The method enables quick, low-cost replication of sub-100 nm geometries over a large area. Such nanoscale geometries have traditionally been realized using e-beam lithography, which is extremely slow. While the partners believe that e-beam lithography will continue to be used for the tiniest stamp patterns, they believe that SSIL is more suitable for large-area processes.

The new stepper is suitable for nano-patterning of optical and electronic materials and biomaterials as well as 3D geometries. High-accuracy alignment also enables nano-patterning to be performed on the same platform as other patterning methods.

The SSIL stepper is the most significant achievement of the the Emerging Nano-patterning Methods project, which is coordinated by VTT and was launched in 2004 with a budget of €31 million. To promote the feasibility of solutions developed the within the project, special focus is being paid to cost-efficiency and the environmental impact of the process.

The project has also been concerned with developing roll-to-roll methods for the production of nano-geometries. A printer designed by VTT combines the new nano-patterning method with gravure printing and flexo techniques in one process run.