A team from P.A.L.M. Microlaser Technologies, a subsidiary of Carl Zeiss MicroImaging, Jena, has been nominated for the German President's 2006 Deutsche Zukunftspreis (German Future Prize). 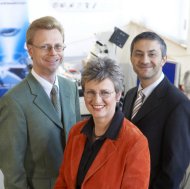 Karin Schütze, Yilmaz Niyaz and Carsten Hoyer are on the shortlist of four groups for the development of the LMPC laser micromanipulation technique and its implementation in marketable instrument systems.

The Laser Microdissection and Pressure Catapulting technique provides high-purity biological specimens that are needed to explore cellular processes on a molecular level. The award, established by the Federal President to highlight innovative potential in Germany, will be presented in November in Berlin by German President Horst Köhler. On the day of the presentation, a jury consisting of distinguished figures from science and industry will select the winner from the four nominated teams.

LMPC technology allows cells and cell areas, including cells or cell components such as chromosomes, to be marked, extracted with a laser beam and "catapulted" into a vessel without contact, and therefore also without contamination, using a single laser pulse.

The specimen can then be used to obtain highly pure DNA, RNA or proteins for molecular examinations. The resulting detailed information about cellular processes on a molecular level is of major importance, such as for disease diagnosis and treatment.

More than 600 systems have been delivered since the global market launch of the PALM MicroBeam. The associated company P.A.L.M. Microlaser Technologies has become the international technology and market leader in the field of non-contact dissection techniques for single cells in biomedicine, and for laser microdissection and micromanipulation systems in particular.

LMPC technology has been honored on several previous occasions. In 2001, Karin and Raimund Schütze, the founders of P.A.L.M. Microlaser Technologies, received the Philip Morris Prize for the development of a marketable micromanipulation system. And in July 2006 they were the first prize winners of the Berthold Leibinger Innovation Award.

The German President's Prize for Technology and Innovation, presented for the tenth time in 2006, is an annual award honoring outstanding innovations in technology, engineering and natural sciences within Germany. The German Future Prize is worth € 250,000 and is one of the most prestigious science awards in Germany. It honors projects of great scientific value which are ready for use and marketable.

It is not possible to apply for this prize; the right to propose candidates for the German Future Prize lies with leading German establishments in science and industry. The LMPC technology project was recommended by the jury of the Philip Morris Research Award.