A UK start-up has developed a new type of security scanner that exploits terahertz waves.

ThruVision has started trialing its terahertz imaging technology at an airport in the UK. And Claes Bergstedt the firm’s CEO is confident that it will be generating revenue from its security screening products within 6 to 9 months. 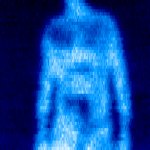 Founded about 1 year ago, the spin-off from the UK’s Rutherford Appleton Laboratory (RAL) now has approaching 25 staff at a science park near Abingdon. It is busy commercializing CCD-style detectors of terahertz radiation developed at the lab for astronomical imaging.

In 2002, a joint project called Star Tiger between RAL and the European Space Agency (ESA) developed a 1-inch sized 16-pixel passive terahertz imaging chip. The success of the space camera project led to the idea of creating a company to take the work into the commercial domain.

Although ThruVision is reluctant to discuss the details of its detector it appears to blend high-frequency electronics with a photonic crystal microstructure. According to Chris Mann, Thruvision’s CTO, the technology can image radiation from a few hundred gigahertz to several terahertz and has a sensitivity in the picowatt regime.

Waves in this gap between the far infrared and the microwave parts of the electromagnetic spectrum are able to pass through clothing and packaging but are strongly absorbed by metals and other inorganic substances. This means that a terahertz imaging system can potentially reveal the presence of concealed objects such as knives and guns and also smuggled items such as narcotics, alcohol and money.

However, Bergstedt says that security applications are just the beginning. “We are developing a terahertz platform technology that can be applied to all kinds of imaging and material analysis,” said Bergstedt. “The challenge is getting the cost of the technology down. We’ve now done that and can produce detector arrays on a commercial basis.”

He says that the big advantage of their detector technology is that it is passive, meaning that no illumination source of terahertz waves is required. Instead the detector simply images the radiation emitted by the target object. What’s more it operates at room temperature and is capable of a sub-second refresh rate allowing real-time imaging.

ThruVision is not the first UK firm to try and commercialise terahertz technology. A Cambridge-based start-up Teraview is also developing active terahertz spectroscopy systems for the use in pharmaceuticals industry and medical fields.