Lasers test the sweetness of fruit

Ensuring the quality of fruit sold in supermarkets could be one step easier thanks to a laser-based system being developed in the US. 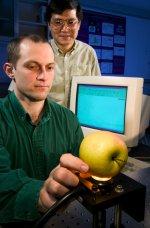 An optical system that measures the texture and taste of fruit could soon be sorting batches of apples before they make it to the supermarket shelf. By firing four laser beams at the fruit, Renfu Lu from the US Agricultural Research Service believes he has come up with a non-destructive way to predict firmness and sugar content.

Firmness is typically determined by puncturing the fruit with a steel probe but there are problems with this approach. First of all, the test sample cannot be sold. Secondly, the tester has to assume that the condition of the thousands of other fruit in a particular batch is the same as the test sample. 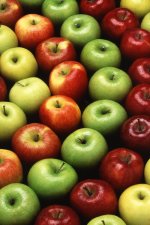 "Our method has the advantages of being fast, truly non-destructive and relatively easy to implement for future on-line applications," Lu told Optics.org. The system can also test every individual fruit.

"The lasers generate scattering images, which are acquired by a multispectral imaging system," explained Lu. "Useful features are then extracted from these images and input into the neural network for predicting firmness and sugar. We have developed our own in-house program for performing these image processing tasks."

To date, the system has been tested on apples and peaches and the results are encouraging. Lu adds that the lasers do not mark the fruit's skin or alter its taste.

The current system can measure two fruit per second but Lu is hoping to improve this. "We will build a new version of the prototype system with an improved accuracy, a better or simpler calibration procedure and a faster speed," he said. "We have a different project focused on measuring multiple quality attributes and we hope to integrate the two systems in future."

Lu's goal however is to work with a manufacturer and see the technology being used in commercial applications. He admits though that there are important issues to address before this transfer can take place.