Moulded silicone optics that stretch lead to a new type of light scanner.

A new way to scan light beams that relies on a stretchable silicone diffraction grating has been demonstrated by scientists in The Netherlands. According to the developers at Delft University of Technology, the advantages of the approach are that it is inexpensive and leads to thin, high-performance components that are easy to integrate into devices (Optics Letters 30 949). 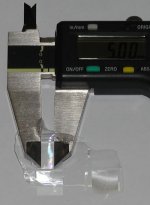 The scanner consists of a 0.4 mm thick sheet of viscoelastic silicone elastomer which contains a corrugated diffraction grating with either rectangular or triangular grooves. The grating is made by pouring the elastomer into an etched silicon master mould and then curing it at 60 deg for 8 hours until it has polymerized.

The cured material has a refractive index of 1.43 and transmits visible and near-infrared light. It can be stretched by up to 20% and still return to its original shape.

To make a scanner, a mechanical actuator simply deforms the grating to alter its pitch and change the diffraction angle of an incident light beam. In tests with a red (633 nm) HeNe laser, the angle was tuned from 6.6 to 5.4 deg with a constant diffraction efficiency of about 17%. The researchers believe that higher efficiencies are potentially possible.

What's more, by connecting the elastomer to an electromechanical acutator it is possible to perform high-speed dynamic scanning. “The bandwidth of the scanner is determined by the grating size and the type of actuator used. In our case an 18 mm long grating was driven by a voice coil and a bandwidth of 1 kHz was reached,” explained Aleksey Simonov from TU Delft’s Electronic Instrumentation Laboratory. “We believe that with a shorter grating driven by a piezoactuator, the maximum frequency can be increased by at least an order of magnitude.”

Simonov and his colleagues are now attempting to use the technology to make a range of optical devices for use in adaptive optics, spectroscopy and interferometry. “We are now working on a viscoelastic-based deformable mirror and with our existing gratings we will try to design a prototype scanning spectrometer,” he told Optics.org. “We are also developing deformable optical elements for ultrafast laser systems and laser beam shaping.”