US scientists design an optoelectronic retina with 2500 pixels per millimeter.

An artificial vision system with a performance that is allegedly good enough to recognize faces, read large fonts and watch TV has been designed by a team of scientists at Stanford University in the US.

The system, described in the February 22 issue of Journal of Neural Engineering, features a wallet-sized computer, a tiny video camera mounted on a pair of goggles and an infrared-sensitive detector chip implanted in the retina. Tests are currently ongoing in rats and the retinal chips also about to be implanted into pigs. However, human trials are at least three years away.

The hope is that one day it may be able to improve the vision of people who suffer from retinal degeneration, the death of eye’s photoreceptor cells. Around 700,000 people each year are diagnosed with age-related macular degeneration which results in impaired vision and in some cases complete blindness.

As to how the system works, the camera captures an image of a scene which is then passed to the computer for processing. A LCD illuminated with an infrared LED then projects an infrared image of the processed data through the eye onto a retinal chip which stimulates nerve cells. 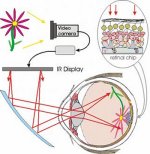 The 3 mm-sized chip allows uses to perceive 10 degrees of visual field. It consists of a dense array of imaging pixels -- infrared-photodiodes connected to cell-stimulating electrodes. In the past, the difficulty of achieving the necessary close proximity (a few micrometers) between cells and the electrodes has severely limited the resolution of chip implants resulting in poor vision.

The Stanford team says that its chip offers a resolution of 2500 pixels per millimeter, corresponding to visual acuity of 20/80 which is sufficient for reading a book or using a computer.

It achieves this performance by designing a chip that lets the cells grow around the electrodes which either protrude from the chip like miniature pillars or are recessed into pores. “We actually invite cells to come to the electrode site, and they do it happily and very quickly,” said Daniel Palanker, a member of the Stanford team. Within three days cells migrate to fill the spaces between the pillars and pores of the subretinal implant.

Although the idea of using retinal implants is not new, other teams in Germany, the US and Japan are working on the topic, the Stanford approach uses a projection and tracking system to follow the rapid small movements that the eye makes when viewing a scene.

“In reality, when you think that you are fixating to a certain point, your eyes are not steady,” said Palanker. “You are microscanning it all the time.”