Glasgow, UK -- A Professor in the Department of Physics at the University of Strathclyde has received a prestigious international award in recognition of his contribution to the field of optics. Professor Martin Dawson, Director of Research at Strathclyde’s Institute of Photonics and also head of the Strathclyde-hosted Fraunhofer Centre for Applied Photonics, has been named as the 2021 recipient of The Optical Society’s (OSA) Nick Holonyak Jr Award

The award is presented annually for significant contributions to optics based on semiconductor devices and materials. Professor Dawson is the first UK-based recipient of the award since it was established in 1997. 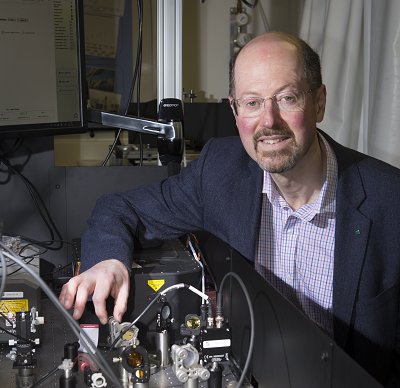 Professor Dawson’s career has focused on applied research in academia and industry in the UK and USA and he has been involved in the formation and technical development of a number of spinout businesses. His work involves semiconductor materials, microfabrication, optoelectronic device development and laser technology, with applications in optical wireless communications, displays, biomedical instrumentation and the heterogeneous integration of separately-manufactured components into single devices.

He is receiving the award “for wide-ranging contributions to the development and application of III-V semiconductor devices, especially including gallium nitride micro-LEDs and optically-pumped semiconductor lasers.” These semiconductor devices are produced using materials created from Group III and Group V of the periodic table of the elements.

“Martin Dawson’s pioneering work on III-V semiconductor devices perfectly represents the spirit of the Nick Holonyak Jr. Award,” said 2021 OSA President Connie Chang-Hasnain, Whinnery Chair Professor Emerita of EECS at University of California, Berkeley, USA. “On behalf of the OSA, we are delighted to bestow this honor in recognition of his achievements”.

Professor Dawson said: “It is a great honour to receive this award from OSA and I’m really thrilled. It coincides with the 25th anniversary of the founding of the Institute of Photonics, so the timing couldn’t have been better, and it is a credit to the scientific adventurousness and close collaboration and teamwork which have been features of the Institute since the outset.

“The two areas highlighted in the citation have deep roots at Strathclyde and both are of industrial as well as basic research significance. Micro-LED technology is now taking off worldwide for new types of high-performance displays, with stunning prototypes and initial commercial products appearing rapidly, so it is particularly gratifying to see our role in the founding and development of the field recognised in this way.

“When we established the Institute of Photonics, we took a distinctive approach in focusing on applications-driven work of industrial relevance, but of course no-one can predict exactly how markets for new technology will emerge. The display industry is incredibly competitive and it will be fascinating to see how micro-LED technology fits into the broader commercial landscape in the years ahead.”

Professor Dawson was previously awarded the 2016 Gabor Medal and Prize by the Institute of Physics and the 2016 Aron Kressel Award by the IEEE Photonics Society.