Dr. Thomas Weber stepping up to Toptica's supervisory board 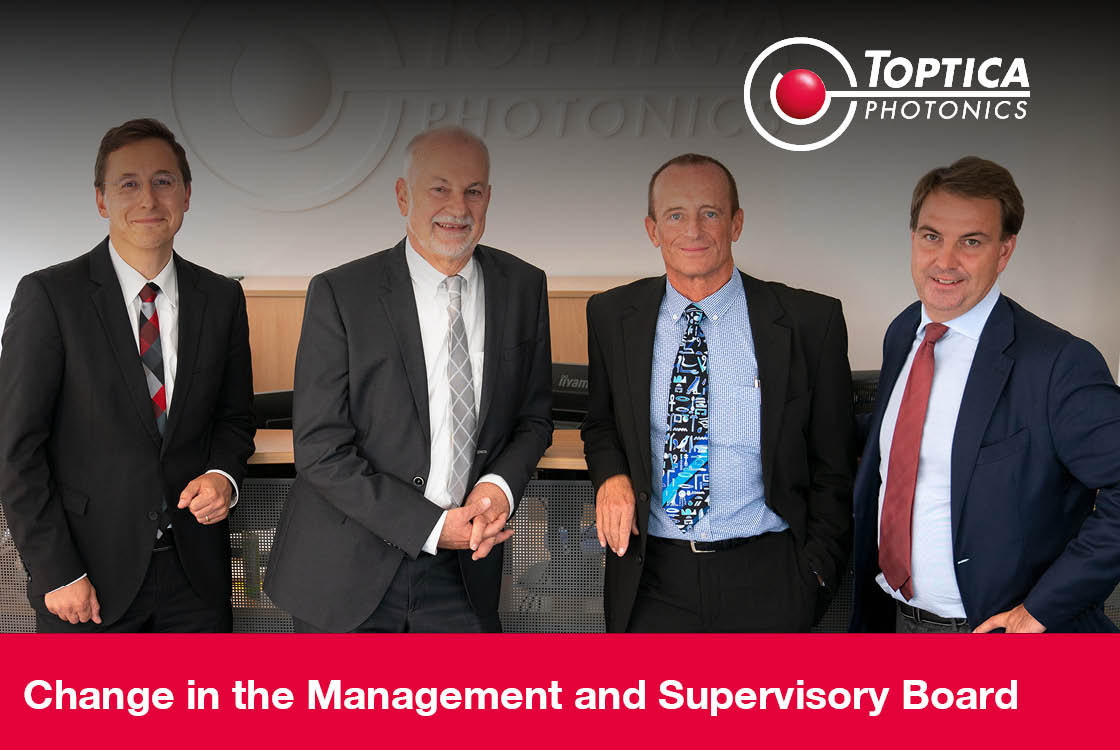 Graefelfing (Munich) Germany -- As of 01.10.2020, Dr. Thomas Weber (pictured above, second from right) will step down from the Executive Board of TOPTICA Photonics AG to the Supervisory Board. After 22 years with the company, the long-standing founding board member (Finance & Operations) is retiring from his leadership role in the company, which continues to grow strongly.

On September 21, 2020, the Supervisory Board of TOPTICA Photonics AG bade farewell to Dr. Thomas Weber from his role as Management Board member (Finance & Operations). After more than 22 years, he is leaving TOPTICA and retiring. "With his drive and organizational strength, Thomas has left a lasting mark on our company. I would like to thank him in the name of the entire TOPTICA family and the Supervisory Board for his passionate commitment. We wish him all the best for his future career," says his co-founder Dr. Wilhelm Kaenders.

"Thomas was a stroke of luck for me and the company TOPTICA, which was founded in 1998 from the slipstream of the Technolas/TuiLaser. With my colleague from the board, I had a commercially experienced partner at my side, which led to a successful division of roles that personally freed me from many administrative obligations," summarizes co-founder and board member Dr. Wilhelm Kaenders.

Dr. Thomas Renner, CEO of TOPTICA Photonics AG, adds: "Dr. Weber has shaped the company's image, enabled the extraordinary growth of the TOPTICA Group and has continuously developed it, promoting new concepts and creating partnerships. Under his leadership, the company-wide IT was set up in a future-oriented manner and digitization was pushed forward. With his far-sightedness, he has made a decisive contribution to successfully positioning the TOPTICA family for the future".

With Dr. Thomas Weber's move to the Supervisory Board, the Management Board now consists of Dr. Thomas Renner (Sales & Operations) and Dr. Wilhelm Kaenders (Technology).

Additional change in the Supervisory Board
Prof. Claus Zimmermann (University of Tübingen), who was one of the inspirations for the company's foundation and has served as a member of the supervisory board since TOPTICA's transformation into a public limited company in 2001, was given a farewell in his last supervisory board meeting with a gold-plated laser (DL100), which is the most successful tunable diode laser and the cornerstone of TOPTICA's current market position.