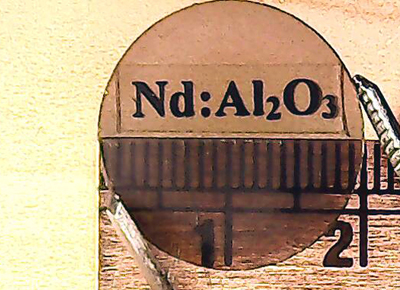 By doping alumina crystals with neodymium ions, engineers at the University of California San Diego have developed a new laser material that can emit ultra-short, high-power pulses — a combination that the researchers say could potentially yield smaller, more powerful lasers with superior thermal shock resistance, broad tunability and high-duty cycles.

The work has just been published in Nature journal Light: Science & Applications. The team led by Prof. Javier Garay, a mechanical engineering professor at the UC San Diego Jacobs School of Engineering, will also present the work at the 2018 SPIE Optics + Photonics conference, also in San Diego, between August 19 to 23.

To achieve this advance, the UCSD engineers devised new materials processing strategies to dissolve high concentrations of neodymium ions into alumina crystals. The result, a neodymium-alumina laser gain medium, is the first in the field of laser materials research. It has 24 times higher thermal shock resistance than one of the leading solid-state laser gain materials.

Neodymium and alumina are two of the most widely-used components in the latest solid-state laser materials. Neodymium ions are used to make high-power lasers. Alumina crystals, a type of host material for light-emitting ions, can yield lasers with ultra-short pulses. Alumina crystals also have the advantage of high thermal shock resistance, meaning they can withstand rapid changes in temperature and high loads of heat.

However, combining neodymium and alumina to make a lasing medium is challenging. The problem is that they are incompatible in size. Alumina crystals typically host small ions, such as titanium or chromium. Neodymium ions are too big so they are normally hosted inside a crystal of yttrium aluminum garnet (YAG).

Prof Garay explained, “Until now, it has been impossible to dope sufficient amounts of neodymium into an alumina matrix. We figured out a way to create a neodymium-alumina laser material that combines the best of both worlds: high power density, ultra-short pulses and superior thermal shock resistance.”

Cramming in the neodymium

The key to making the neodymium-alumina hybrid was by rapidly heating and cooling the two solids together. Traditionally, researchers dope alumina by melting it with another material and then cooling the mixture slowly so that it crystallizes.

“However, this process is too slow to work with neodymium ions as the dopant because they would essentially get ejected from the alumina host as it crystallizes,” explained the paper’s first author Elias Penilla, a postdoctoral researcher in Garay’s research group. So his solution was to speed up the heating and cooling steps fast enough to prevent neodymium ions from escaping.

In tests, researchers also showed that neodymium-alumina has 24 times higher thermal shock resistance than one of the leading solid-state laser gain materials, neodymium-YAG. “This means we can pump this material with more energy before it cracks, which is why we can use it to make a more powerful laser,” said Garay.

The team is now working on building a laser with their new material. “That will take more engineering work. Our experiments show that the material will work as a laser and the fundamental physics is all there,” said Garay.

The Nature Light: Science & Applications paper was unusually frank about the technical and commercial potential of the development, with its Discussion section stating:

”We introduce a powder processing route in conjunction with single-step CAPAD reaction/densification to produce transparent bulk polycrystalline Nd3+:Al2O3 with Nd incorporated. The ceramics have a high transmission at 1064 nm and display absorption bands at λ = 585 nm, 748 nm, and 806 nm, corresponding to transitions from the 4I9/2 manifold of optically active Nd3+ that result in high peak absorption cross-sections.

“The PL bandwidth of ~13 THz centered at 1064 nm represents a new record for Nd3+ media, thus permitting the generation of ultra-short pulses. The radiative lifetimes are long and yield a large emission cross-section, which result in an optical gain that is suitable for amplification and lasing.

“Moreover, the significantly higher RS ~19,500 W/m of Nd3+: Al2O3 promises a significantly higher duty-cycle and/or peak-power, making Nd3+: Al2O3 a potentially revolutionary gain material. Finally, we note that the nano/microstructural strategies demonstrated here should be applicable to many other oxide and nitride gain systems that were not previously believed to be applicable as laser ceramics and thus represents a new approach to producing gain media.”