From intense X-rays to record-breaking neutron generation, Colorado plasma scientist Jorge Rocca is re-creating the extreme conditions found in stars with nanowires and a Joule-level laser. 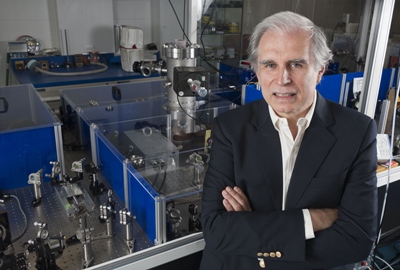 That plasma produced a hefty two million neutrons per joule, some 500 times more than the yield generated using flat targets. The physicists demonstrated that you don't need a multi-kilojoule laser - let alone a megajoule monster - to recreate extreme plasma conditions approaching those inside the sun. And according to Rocca, there's more to come.

"We accelerated deuterons to megaelectronvolt energies to drive fusion reaction and ultrafast neutron bursts," highlights Rocca. "Our results will impact nuclear science and high-energy-density research, and we're now going to operate our laser at a higher energy and intensity to [further] increase neutron production."

Efficient coupling
The world of plasma physics got its first real glimpse of the power of nanowires some two decades ago, when Robin Marjoribanks and colleagues at the University of Toronto, Canada, bombarded nickel nanowires with picosecond laser pulses to produce intense X-ray pulses fifty times more efficiently than achieved with solid targets.

The results prompted rapid laser-matter interaction development around the world, and by 2013 Rocca and colleagues including Reed Hollinger, also from CSU, and Alexander Pukhov from Heinrich-Heine-Universität Düsseldorf, had replicated this measurement – only this time with femtosecond laser pulses of only 0.5 J.

During this process, electrons are ripped off the nanowire surface and accelerated to extreme energies within the gaps between the nanowires. Electrons collide with nanowires, then these nanostructures exploded, filling the voids with the ultrahigh energy density plasma.

"When you shoot such a laser at a solid target, [rather than nanowires], you form this critical density layer which the laser light cannot penetrate - and you end up heating a much smaller volume of material," says Rocca. "But this research provided a clear demonstration that we had enabled extremely efficient coupling of the pulse energy deep into the nanowire array."

Using the same laser set-up, the team rapidly demonstrated record X-ray conversion efficiency in gold nanowires. And having unequivocally demonstrated that ultrashort laser pulses with nanowires was a winning combination in the world of plasma physics, the next step was microfusion.

Firing femtosecond pulses of up to 1.65 J, they then irradiated the nanowire arrays to produce ultra-high energy density plasmas in which deuterons were accelerated to megaelectronvolt energies. The deuterons fused, ultrafast bursts of neutrons were generated - and microfusion had been achieved. 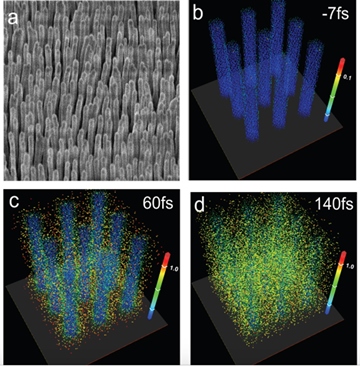 Clean pulses
So what's the secret? Clearly the tightly coupled interaction between the laser and nanostructures is key, and according to Rocca, ultrashort pulses are imperative.

"The nanowires only last for a short time and you really need to deposit all of your energy into these structures before they explode to fill the gaps in between," he explains. "We have used 60 fs pulses; if you use longer pulses, that's a lot more challenging."

As well as short, the pulses also have to be 'clean'. Frequency-doubling the wavelength of the laser from infrared to blue serves this purpose, improving the contrast between the main laser pulse and any preceding pulse.

"The laser pulse really needs this high contrast ... we don't want to see any pre-pulses with sufficient intensity blowing away the nanowires before the main pulse arrives," highlights the plasma physicist.

"In our experiments, the main laser pulse is at least twelve orders of magnitude larger than any pre-pulse," he adds. "This really ensures that the nanowires cannot be destroyed before that main pulse arrives."

In order to increase the neutron yield from their nanowire array plasmas, Rocca and colleagues will now operate their laser at higher energies. "We do need larger numbers for many applications," admits the researcher.

The record-breaking fusion results have already been well-received by the wider plasma physics community: Matthew Hill from the UK’s AWE (the Atomic Weapons Establishment) tells optics.org that getting such compact lasers to first generate the X-ray brightness typically associated with much larger systems like those found at laser facilities Titan, Orion and Omega-EP, is “a real accomplishment”.

"These larger facilities can also benefit from being able to test and develop diagnostics at the more accessible and flexible 'nanowire-firing' smaller facilities, freeing up beam time and improving data quality," he points out.

Indeed, Rocca confirms he is already collaborating with researchers from laser facilities, including Titan and Orion, to assess the possibility of running experiments together. 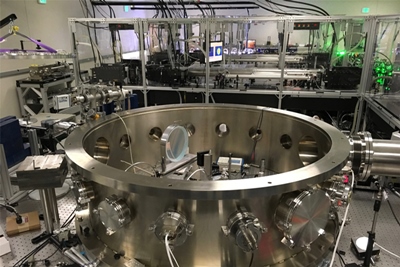 Neutron imaging
Hill adds that the latest micro-fusion results from deuterated nanowires open up a range of fusion research opportunities for smaller university groups; experiments that would otherwise have been difficult to pursue. "In turn, this should provide a boost to innovation across the entire field of fusion research as well as supporting diagnostics," he says.

Rocca is hopeful that his compact, ultrafast laser approach will also find use in neutron imaging, pointing out how materials scientists currently use neutron sources from particle accelerators for diagnostics. He is also confident that ultra-high energy density studies will benefit from this neutron source. Indeed, one possible future avenue is using his neutron pulses to calibrate neutrino detectors. "If you have a laser like ours that can fire a few pulses a second then you can study rapid events and make very rapid measurements," he says.

A further exciting prospect is to see whether nanowires can be used to enhance the fusion and X-ray yields from larger, kilojoule-scale short-pulse lasers. If achieved, these larger lasers could provide a relatively low-cost route to the ultra-bright, charged particle and X-ray sources needed to probe the hot dense plasmas generated in inertial confinement fusion (ICF) – currently the preserve of giant systems like the National Ignition Facility (NIF) and Laser Megajoule (LMJ).

That said, Rocca is keen not to muddy the waters between his microfusion results and this type of fusion energy research, asserting: "Microfusion is not for energy production and is not going to be a power source."

But he does confirm an interest in using nanowires to enhance yields from kilojoule, short-pulse lasers. "The challenge here is that longer pulse length," he says. “But this is a topic of investigation and a very exciting possibility for us.”

Rebecca Pool is a freelance journalist in Boston, UK.