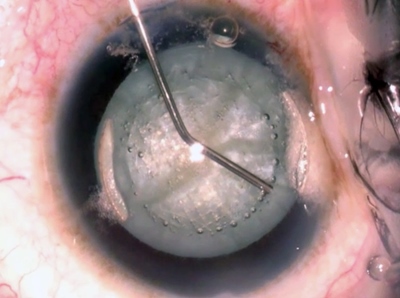 Venture-backed French startup company Keranova says that its femtosecond laser system will “revolutionize” the field of cataract operations, by providing surgeons with a single tool that can be used for the entire procedure.

The St. Etienne firm says that it has found a way to improve on the current generation of ultrafast laser equipment, which is unable to complete the crucial lens photo-fragmentation step quickly enough.

Surgical disappointment
Presenting the company’s technology during an industry session at this week’s SPIE Photonics Europe event in Strasbourg, Keranova’s scientific director Aurélien Bernard explained that despite the introduction of various femtosecond laser systems in recent years, surgeons had been left disappointed with their capability.

Back in 2010, femtosecond laser systems had been expected to deliver major breakthroughs in cataract surgery, a promise that resulted in a series of major acquisitions by healthcare giants Alcon, Abbott Medical Optics, and Bausch & Lomb.

But although those current laser systems are good for making precise incisions and opening up the capsule within a patient’s eye that contains the cloudy lens (known as capsulotomy), they are unable to completely fragment the hard crystalline lens quickly enough. For safety reasons, cataract procedures require the fragmentation step to be completed within three minutes, Bernard said.

That means the vast majority of lens removal is still completed with what is known as a phaco handpiece, requiring surgeons to operate two different pieces of equipment, and often meaning that the patient has to be moved to a separate room.

Bernard told delegates that there was a “huge opportunity” for a clinical system that is able perform the entire cataract procedure, remarking that although 25 million such surgeries take place each year, very little has changed in terms of the removal process – with 93 per cent of those operations still carried out manually.

Wavefront shaping
Keranova’s first-generation machine, which has been tested on rabbits and ex vivo human cataracts, is based around a wavefront-shaping technique that uses a dynamic phase mask to generate a matrix of laser spots.

Bernard said that it was able to completely photo-fragment, or photo-emulsify, a lens into small cubes within one minute. “It means that you can use one machine for the entire procedure, avoid using the phaco handpiece, and lower the surgical risk,” he added.

On its own web site, the company states that the technological advance will make its surgical equipment uniquely able to perform cataract surgery automatically, robotically and ultra-precisely, in a few seconds.

“The surgeon will only have to aspire the emulsified debris of the crystalline lens, and to introduce the implant into the operated eyeball,” Keranova claims. “So our machine will perform about 80 per cent of the surgical procedure without human intervention, while the surgeon will perform the end of the procedure, which involves no potentially dangerous [steps].”

Bernard said that the system was based around a laser producing an average output power of around 5 W at a 100 kHz pulse rate, and uses optical coherence tomography (OCT) imaging to monitor the eye being operated.

Second venture round under way
Founded by the successful medical entrepreneur Fabrice Romano and Sophie Valla in June 2016, Keranova has since raised €4 million in venture funding, with an additional €1 million in support from the Bpifrance bank.

High-profile investors include Mérieux Développement, the venture arm of major French healthcare specialist Institut Mérieux. Keranova reported previously that the initial funding will enable it to reach the clinical trial phase, with Bernard adding that a second round of funding was now under way.

In February this year, Keranova was awarded a €5 million grant to further develop the laser system from the first prototype stage, saying at the time that it should result in the first surgical robot for cataract treatment. It expects the equipment to reach the market within two years.

Refractive surgery is another potential application of the system, with the company boasting: “This technology gives our laser a super-fast speed that can perform, with superior cutting quality, a corneal flap in less than half a second - compared to 10 seconds with current technologies.”