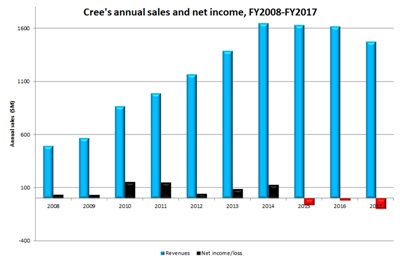 Cree's sales and profits: past ten years (click to enlarge)

The stock price of US-headquartered LED lighting company Cree has slumped to a nine-year low after the Durham, North Carolina, firm posted its latest financial results.

Although sales in its fourth fiscal quarter came within the expected range, at $359 million they were down 8 per cent compared with the same period last year. The company’s outlook appeared to spook investors, with Cree’s stock dropping back 10 per cent in pre-market trading on August 23.

Now changing hands at just over $20, the stock is at its lowest valuation since late 2008, in the wake of the global financial crisis. During a period when many photonics companies have seen their stock prices climb to all-time highs, Cree has been heading in the opposite direction in what is a highly competitive market segment.

Full-year results
In its latest financial year, which ended June 25, Cree’s net loss widened to $98 million after its annual sales dipped 9 per cent to $1.47 billion – although that was partly due to costs relating to the US government’s decision to veto the planned sale of Cree’s silicon carbide RF and power chip division Wolfspeed to Infineon Technologies.

Cree’s long-time CEO Chuck Swoboda, who is set to step down from the lead executive role once a suitable replacement is found, told investors that progress had been made in the most recent quarter, with a renewed focus on the Wolfspeed division as demand for power devices is pushed by the requirements of electric vehicles.

But a 30 per cent jump in Wolfspeed sales made relatively little difference to the overall picture. Although Cree’s sales of LEDs remained steady in the latest fiscal year, down only very slightly at $550 million, margins have become even slimmer in what is arguably the most competitive level of the lighting sector.

Meanwhile, the company’s lighting products division has suffered a significant slump in sales. At $701 million, annual revenues were down 21 per cent on the previous year’s $889 million.

Automotive lighting
Discussing the results in what is likely to be his final investor conference call as Cree CEO, Swoboda told analysts that the company was now investing in the Wolfspeed division to ensure that the growing demand in electric vehicles and battery storage can be met.

In this area, Cree’s silicon carbide materials expertise yields efficiency advantages over conventional silicon-based electronic switch devices, and something of a premium in terms of profit margins.

On the lighting side, Swoboda said that Cree had recently begun shipping LEDs to a “tier one” provider of automotive lighting equipment to Ford, for forward lighting applications That represents a relatively new application area for Cree, although the extended design cycles typical of the automotive sector makes it more of a long-term play.

“The automotive business is just getting started, but we're working on several projects that are forecast to turn on over the next 18 months,” the CEO told the investor call.

Danny Castillo, the president of Cree’s lighting division, said that demand from the US market had been lower than expected over the past six months. Swoboda added that this sector would remain flat in the near term, although he said he was optimistic that the lighting business ought to grow over the next year.