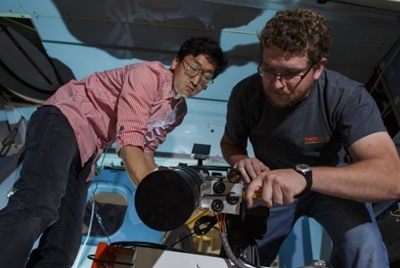 Quantum leap for a quantum link

High-security optical satellite links based on quantum photonics are a real possibility, according to a team of researchers in Canada who have just completed a proof-of-principle demonstration with an airborne receiver.

Although quantum key distribution (QKD) – an encryption method that uses the polarization or phase of individual photons to keep messages ultra-secure – has been demonstrated with airborne platforms before, the University of Waterloo scientists are the first to transmit quantum keys from a ground station to a receiver mounted on an airplane.

In a paper just published in the new journal Quantum Science and Technology, Christopher Pugh and colleagues report carrying out 14 passes over a ground transmitter station with a receiver on board a Twin Otter plane.

They generated a quantum signal link on seven of the passes, and managed to extract the “uncrackable” quantum key that enables a secure message to be deciphered on six of those seven occasions.

Group leader Thomas Jennewein described the result, which came after eight years of preparation, as an extremely important step for the nascent technology.

“It finally demonstrates our technology is viable,” he said. “We achieved optical links at similar angular rates to those of low-Earth-orbit satellites, and for some passes of the aircraft over the ground station, links were established within ten seconds of position data transmission.

“We saw link times of a few minutes and received quantum bit error rates typically between three and five per cent, generating secure keys up to 868 kb in length.”

Satellite ‘blueprint’
Having shown that the basic concept works, Jennewein believes that the results provide a “blueprint” for future satellite missions to deploy quantum-encrypted communications technology.

As it happens, the Canadian government is embarking on just such a mission. In April, the country’s ministry of innovation, science and economic development announced plans to demonstrate quantum technology applications in space – part of a wider $81 million program over the next five years.

The quantum mission involves the Institute for Quantum Computing at Waterloo, with the Canadian ministry saying: “This project will position Canada as a leader in quantum encryption, which uses highly advanced computing technology to create virtually unbreakable security codes.”

While the QKD method has been understood for decades, and has found initial applications in the financial and military sectors, it is subject to certain physical limitations.

Waterloo researcher Christopher Pugh explains: “Ground-based QKD systems use optical fiber links, and are limited to distances of a few hundred kilometers due to absorption losses, which get exponentially worse as the distance increases.”

And while free-space optical links have also been shown to work with moving targets, the additional complications of atmospheric absorption and turbulence, plus the requirement for a clear line of sight have limited Earth-bound free-space transmissions to “only” a few hundred kilometers.

However, part of the difficulty with generating a QKD uplink, as proposed in a the Quantum Encryption and Science Satellite (QEYSSat) mission concept by the Canadian Space Agency and Honeywell Aerospace, is that atmospheric turbulence affects the QKD link earlier in its propagation, compared with a similar downlink.

As a result, all airborne QKD demonstrations thus far have been based around a downlink configuration, sending the key from a moving aircraft to a fixed ground receiver.

Four different polarization states were then imposed on the optical signals, using two phase modulators, and after further optical manipulation these signals were transmitted through a refractor telescope.

The signals arrived at the airborne receiver platform via another refracting telescope, mounted facing out of one of the aircraft’s cabin doors, and were directed to a detector module via a system of beam splitters and optical fibers.

“In total, seven of the 14 airplane passes over the ground station successfully established a quantum signal link,” reports the team, adding that five out of seven attempts made on the second night of experiments were successful, after some minor equipment failures from the first night were fixed.

Of the seven links established with the receiver – traveling overhead at speeds of up to 260 km/h – the team managed to exchange a quantum key on six occasions.

“Our pointing and tracking system was able to establish and maintain an optical link with milli-degree precision over 3-10 km distances while BB84 decoy-state signals (i.e. four different polarization states) were sent across the channel to the aircraft moving at the angular speeds of a low-Earth orbit satellite,” they report in the paper’s conclusions.

“Our system demonstrates the viability of an uplink [for a] QKD satellite mission. The core quantum components of a QKD satellite receiver have been demonstrated and have clear path to inclusion in space-faring system.”

Satellite-ready?
Significantly, the Waterloo team’s QKD receiver uses many components already deemed “space suitable”, and others with a clear path to satellite deployment. Together with their airborne operational demonstration, they say that this illustrates the technological readiness of just such a QKD satellite uplink.

The Canadians are not the only ones working on quantum space links. In August 2016 China launched a “quantum science satellite” featuring optical ground links that is expected to carry out quantum experiments.

According to a Nature report at the time, the two-year Chinese mission features a crystal capable of producing pairs of entangled photons that can be sent to ground stations to generate a quantum key.

The emerging field of quantum technology and the key role that photonics plays in it will also be under the spotlight at the giant LASER World of Photonics event taking place in Munich later this month.

Organizer Messe München says that Trumpf’s Peter Leibinger and Toptica CEO Wilhelm Kaenders will both make presentations on the topic, while Tommaso Calarco from the University of Ulm will address attendees on the plans for a new billion-euro flagship European research effort centered on quantum technologies.