Sensors and systems from Raytheon, Sofradir and Oxsensis unveiled at giant aerospace exhibition. 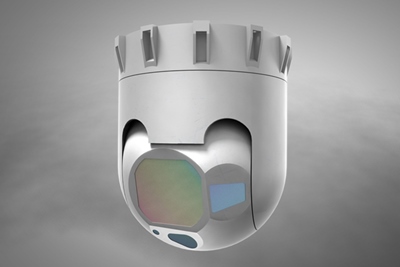 A host of new photonics-based systems and sensor technologies are to be unveiled at this week’s International Paris Air Show.

Among the blue-chip exhibitors at the event, which has taken place at Paris-Le Bourget airport every other year since 1949, is Raytheon.

This year, the US defense contractor is showing off a compact new version of its multi-spectral targeting system (MTS). The 12-inch turret is said to weigh less than 60 pounds (ca. 27 kg) and is designed for “exportability”.

“MTS sensors provide detailed intelligence data from the visual and infrared spectra in the form of high-definition full motion video,” states Raytheon. “The new compact version has the same imaging and targeting capabilities that have made the MTS product family, including MTS-A, MTS-B, MTS-C and MTS-D (AN/DAS-4), the sensor of choice for US military imaging and targeting systems.”

“The Compact MTS delivers capabilities of sensors nearly twice its size at half the weight, making it ideally suited for platforms where space is at premium,” said Roy Azevedo, VP of intelligence, surveillance and reconnaissance (ISR) systems within Raytheon's space and airborne systems business unit. “We've taken more than 4 million combat flight hours of experience and packed them into a compact turret.”

More than 3000 of the larger versions have already been installed on helicopters, fixed-wing aircraft including the C-130J Hercules, and drones – with the latter platforms likely to be the major beneficiaries of the reduction in size and weight.

Aero engine sensors
Elsewhere, the UK company Oxsensis, a 2003 spin-out from the Rutherford-Appleton Laboratory (RAL), said that it was now working on a fiber-optic sensor for jet engines, under a new development collaboration with Parker Aerospace announced at Le Bourget.

The two firms are looking to adapt the pressure and temperature sensors, which are based on miniature Fabry-Perot cavity interferometers micromachined from sapphire, for aerospace applications.

Oxsensis CEO Ian Macafee said in response to the agreement: “We are delighted that application of Oxsensis’ optical instrumentation technology is winning its way onto airframes, with the added prospect of product realization in advanced aerospace systems. The developments are an extension of initial Oxsensis product deployments into gas turbines.”

He added: “Oxsensis is in the vanguard of this exciting new fiber-optic sensor technology, and it is particularly attractive in aircraft applications, with additional applications in the pipeline.”

The venture-backed firm is already working with jet engine maker Rolls-Royce, in a project that it is hoped will see the fiber-optic sensors used in engine health management (EHM) applications – with the potential for retro-fitting.

“High temperatures are where Oxsensis' unique optical sensor concepts flourish,” reported the company earlier this year. “At the heart of the sensor is a minute sapphire disc that has [been] micro-engineered to code pressure, temperature and vibration information.”

‘Supersized’ IR sensor
Also at Le Bourget, infrared sensor maker Sofradir will show off its latest technology, which should soon include a “supersized” detector combining a 15 µm pitch with a 2048 x 2048 pixel array.

The “ALFA 2Kx2K” (short for astronomy large focal array) device is designed with extremely large telescopes and astrophysics applications in mind, and will offer high-level performance in terms of quantum efficiency, noise, and dark current.

The Sofradir team is collaborating with CEA-Leti and CEA-RFU scientists on the sensor development, and expects to deliver a low-noise prototype in early 2019.

Philippe Chorier, space activities manager at the company, said: “We believe ALFA 2Kx2K will enable OEMs to build new instruments, opening up new opportunities for us in astronomy and other sciences, where every single infrared application needs very low flux and low noise compatibility.”

The near-IR sensor will be based on mercury cadmium telluride (MCT), the compound semiconductor material used widely in high-performance space applications, including the “Sentinel” satellites that make up the European Space Agency’s Copernicus Earth observation mission.