But request for injunction over patent infringement claim is denied; judge criticizes parts of Waymo case as ‘nothing more than Optics 101.’ 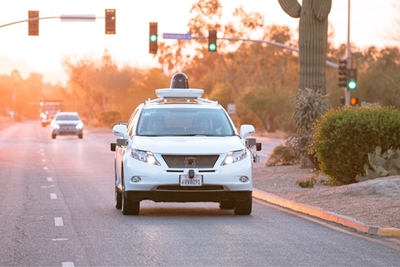 The judge presiding over the lawsuit brought by Google self-driving car venture Waymo against rival Uber has ordered the latter to return some 14,000 confidential documents relating to lidar technology, describing them as “purloined” by former Waymo employee Anthony Levandowski.

However, in a ruling also critical of Waymo’s attempts to protect its trade secrets, Judge William Alsup denied the company’s request to stop Uber’s development of the photonics technology – saying that Waymo had “over-reached” its claims in the case.

Files: ‘pilfered and purloined’
The case centers around the actions of Levandowski, who set up self-driving truck company Otto – subsequently acquired by Uber for a reported $680 million – shortly after his sudden resignation from Waymo in early 2016.

Waymo became suspicious when a series of its employees left to join Levandowski, and when one of its own employees was inadvertently copied on an email thread describing Uber’s lidar designs it decided to take the matter up in court.

In February Waymo filed a lawsuit in San Francisco, claiming that Uber and Otto had stolen mission-critical lidar technology worth half a billion dollars, demanding action to stop further misuse of its trade secrets, a jury trial and “treble” damages for patent infringement.

In a court order dated May 11, Judge Alsup wrote that Waymo had showed “compelling evidence” that Levandowski had downloaded the 14,000 secret files, and that Uber “likely knew or should have known” that he had done so.

“Waymo has also sufficiently shown, for purposes of the instant motion only, that the 14,000-plus purloined files likely contain at least some trade secrets, and that some provisional relief is warranted while this case progresses toward trial,” added the judge.

As a result, Alsup has ordered Uber to hand over all copies and summaries of those files to either Waymo or the court by the end of this month, and to remove Levandowski from any lidar-related activity at Uber – even barring him from communicating on the subject.

“The protocols shall provide for the special master to visit defendants’ facilities and monitor communications as necessary to ensure that Anthony Levandowski remains sealed off from lidar activities,” noted the judge.

‘Optics 101’
However, Alsup was also highly critical of Waymo’s case, saying that it had “over-reached” itself in attempting to claim ownership of some well-known optical principles behind lidar.

“Since Mathew Brady, if not Galileo Galilei, the science of optics has taught that all points within the field of view in front of a lens come into focus behind the lens, organized to duplicate the same overall image (albeit upside down and reversed left to right),” he wrote. “This known principle led to cameras and film photography.

“This, of course, is used in lidar to illuminate specific points in the field of view,” he continued, concluding: “In short, Waymo’s supposed trade secret is nothing more than Optics 101.”

Alsup went on to state that it would be wrong to allow any company to leverage a single solution into a monopoly over broad swaths of other solutions, writing that to do so would be to allow monopolization of broad scientific or engineering concepts and principles.

“Waymo’s gamesmanship on this score undermines its credibility on this motion,” he added.

‘Bone-crushing endeavor’
In light of that, Alsup decided to deny Waymo’s request to stop Uber from developing lidar technology for self-driving vehicles. He added that, with so many files describing the technology supposedly stolen, simply identifying which parts of Uber’s lidar systems appeared to use Waymo’s trade secrets would represent a “bone-crushing endeavor.”

While dozens of companies are working on lidar systems for future autonomous cars, with plenty of commercial systems available, both Uber and Waymo appear to feel that in-house custom varieties will be required for future success.

At the time of the Uber acquisition, Otto was working on a lidar system dubbed “Spider,” said to have continued at Uber until October 2016. But after that, it is thought that Uber abandoned Spider in favor of its current lidar project, known as “Fuji.”

Although Judge Alsup’s original ruling outlined the technical differences between the two approaches, the ruling text has been heavily redacted in the public record.