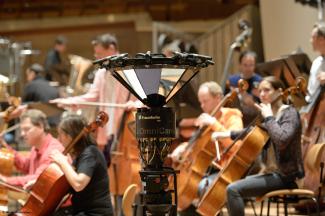 The IBC Conference on electronic media and the entertainment industry held this week in Amsterdam will include a demonstration of panoramic video signals transmitted to multiple devices via satellite, part of a research project that could point towards future ways for audiences to see live events.

It's the result of a collaboration between the Fraunhofer Heinrich Hertz Institute (HHI), Berlin, and Paris-based satellite operator SES, and will involve a 10k by 2k-pixel resolution video signal being received at the SES stand before being passed on to a high-definition display and a set of virtual reality (VR) head-mounted devices.

A viewer can then choose a viewing angle, zoom in and out, or turn the picture on the TV display using a simple remote control; or choose to wear a VR headset to which the video signal is delivered simultaneously.

The video has been filmed with the Fraunhofer HHI OmniCam-360 camera, and is being transmitted to the show via SES's Astra 19.2°E group of orbital communications satellites.

HHI and SES intend the demonstration to provide a first glimpse of what a future VR 360-degree video would look like, allowing the viewer the immersive experience of being part of a virtual event, such as sports, concerts or other live shows.

"We use a combination of technologies here to showcase what is possible when using hybrid approaches," said Dr. Ralf Schäfer, Fraunhofer HHI's Head of Division Video. "There is no stadium in the world providing enough seats for all enthusiastic fans. So imagine a live event somewhere in the world, filmed with professional cameras like our OmniCam-360 and then delivered to a huge global audience via satellite. And every single viewer at home has the best seat in the middle of the show."

New video ecosystem
The OmniCam-360 consists of ten 36-degree mirror segments, each equipped with one HD camera, according to HHI product data. The cameras are arranged vertically and around a virtual center, reciprocal to the cylindrically arranged mirror segments.

This set-up produces a covered field of view of about 60 degrees, and allows parallax-free stitching of scenes in a distance range said to be between one meter and infinity, using image stitching technology developed by HHI.

Modifying the design so that there are two cameras per segment rather than one allows the system to generate 3D video content - a total of 20 micro HD cameras for 360-degree 3D panoramic recordings. Arranging the lenses of each camera pair at distances between 40 and 70 mm achieves the intended 3D effect.

For SES, the demonstration forms part of its commitment to the role of satellite technology in the new video ecosystem now taking shape. Its SES Platform Services (SPS) affiliate allows the company to offer tailored distribution solutions for customers in the media industry, in addition to being an infrastructure provider.

"Satellites are the perfect distribution path for these new kinds of video experiences, as they can manage huge volumes of data being offloaded from terrestrial networks," commented Thomas Wrede of SES. "Furthermore, technology standards like the SAT>IP protocol for processing satellite signals not only allow the viewers at home to pick and choose a device - the TV screen, tablet or virtual reality equipment - but also to choose their favorite viewing position."